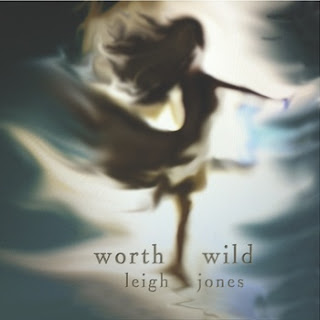 When I was first introduced to Brooklyn singer/songwriter Leigh Jones in a joint concert with John Craigie and Olivia Quillio it was almost impossible not to compare the two females. Olivia Quillio singing raw, sultry songs of heartbreak and frustration, Leigh's songs hopeful, sweet, and caressing love ballads. Subconsciously I started pitting them against each other - a friendly competition of course - to see who would win out which now seems a little unfair. The two had more in common than I initially realized: unexpected powerhouse vocals explode effortless from their rather diminutive statures, real relatable lyrics based on their actual lives, and impressive amounts of musical talents that caresses each verse and musical phrase.

Leigh Jones' debut album Worth Wild is certainly a good one. Reminding me of Sylvie Lewis with its ability to convey intelligence while also remaining accessible and catchy featuring unexpected rhymes and a noticeable folk-pop flair. And Jones' changes gears rather impressively, there's exuberant romp "I Know You Know" and more ballads than you can shake a stick at ("Old Guitar", "Half Mast", "How is California?") there's also soulful highlight "Time Zone" which is probably the album's best track (but not my much).

While Leigh Jones is rather obviously a girl in love, she does a good job of harnessing it in a way that makes you root for her and not just roll your eyes and hurry along. Long distance relationships are the recurring theme on Worth Wild but each time she visits it, Jones has something new to say about it. She celebrates the moments spent together rather than just prattling on about how terrible it is that they have to be apart. Overall, Worth Wild benefits from Jones' ability to handle her love affair with adult sensibility instead of just schoolgirl infatuation.  There's a balance of somber seriousness and tracks that are just plain fun just the thing you need to need to get through what could easily have turned into something unnecessary repetitive.

Give Leigh Jones' debut album Worth Wild a listen now: