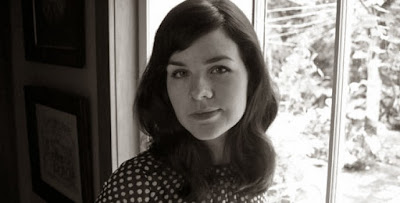 My introduction to New Zealand singer/songwriter Hollie Fullbrook aka Tiny Ruins came innocently enough from her future set-mate Will Stratton. A rogue tweet that claimed the then unknown to me songwriter was in Will's words "1000x better in a similar vein" to Laura Marling. I was notably intrigued. Quite the fan of Marling, I took Will's claim as a challenge requiring my full attention. If there was a young songwriter equal or better to Marling, I needed to experience this for myself. Not only to judge for myself whether Will's opinion was valid in my eyes but also in the of chance he was right it would certainly behoove me to know of her.

While the jury's still out if Tiny Ruins is better than Laura Marling or vice versa, I did discover that Fullbrook possessed not only commendable songwriting talents but also a compellingly tender fingerstyle technique. Her lyrical narratives were clever and resoundingly poetic, her melodies heart-stirring and instantly memorable. While I had only gotten the change to listen to a couple of her songs (all of her music isn't yet available in the US), the true moment of discovery occurred during an intimate set the night before CMJ officially began at We Listen For You/Doppelgang Media's CMJ Kickoff Party where Fullbrook played unquestionably the night's softest but mesmerizing and transformative set. A definite highlight of the set was, unironically, the last song "She'll Be Coming Round" when Fullbrook let loose during an instrumental break at the song's end. It was that moment I knew I would drop all my other CMJ plans to catch her as many times as I would be able.

In addition to hearing some of the newer songs from her upcoming sophomore record Brightly Painted One, it was a treat to watch Fullbrook bring her songs to life, the melodies gradual build, gently unfurling; the songs reverberating with emotion and purpose and filling each and every nook of the room. So while it may be a moot point to argue that Tiny Ruins is a better singer/songwriter than _____, I do know one thing: Hollie Fullbrook was without a doubt one of my favorite parts of CMJ if not perhaps my favorite music discovery of the year. Her songs are feats of subtlety both lyrically and in composition filled with poignant moments and ineffable charm.

Tiny Ruins' sophomore full length Brightly Painted One will be out in New Zealand early 2014 with a US date hopefully soon to follow.