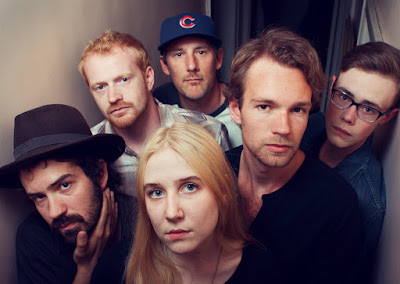 One of the cooler things I've experienced from attending Teen Daze's past few Brooklyn tour stops aside from the shows themselves has been the realization that his backing band consists of talented musicians often with their own musical projects brewing elsewhere. From Kyle Reigle's Cemeteries/Camp Counselors to David Wirsig's self-titled solo project, the most unexpected discovery however occurred in the form of Jordan Kurtz, who held down synth duties, recently unveiling his indie pop project Dream Country.

My surprise of course isn't because I expected the project to be anything less than good but rather that Kurtz made absolutely no reference to it at all during our albeit brief time together. In fact the only reason I happened upon it was due to an unintended recommendation from Kurtz's fellow backing bandmate Simon. With a debut self-titled album set for early January, the project has clearly been a long time coming and yet slight feelings of musical betrayal aside, I'm just happy to be clued into Dream Country's debut at just the right time. "Radio", the first single from the upcoming record, is all breezy, easy listening vibes with just the right amount of pep keeping things moving. With everything on it from violin, trumpet, harmonica, banjo and a piano-synth hand off in addition to the standard guitar, drums, and bass, the most surprising thing about the track is just how it manages to keep all these instruments contained within. "Radio" is an enjoyably smooth jam that's simple in both its energy and feel in a way that betrays its various moving parts. "Radio" introduces Dream Country as a bunch of careful musicians able to team up in a way that's beautifully understated and effortlessly ear-catching.

Dream Country's debut self-titled record is out January 5th.
Posted by Dante at 12:04 PM No comments: 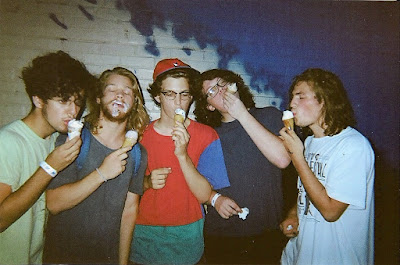 I'm not exactly sure why I kept putting off listening to Baltimore quintet Sun Club. Maybe it's the fact that I kept getting them mixed up with Sun Drug (formerly Vanaprasta) or just the fact that I seem to have a particular knack for ignoring bands I'd probably very much like even when an increasing number of my friends and colleagues are raving about them. Who's to say, really. I only know that it took being asked to listen to them point blank that I set out to do just that and discovered that Sun Club are just the type of band I've been looking for.

The first song I've ever heard from them and arguably still my favorite after giving their recently released debut record The Dongo Durango a spin, "Dress Like Mothers" is a more than adequate introduction to the band. Sun Club's songs don't stop at being summery pop rock. No, they practically radiate with an intensity and energy that rivals the sun itself. While there may not be anything all that revolutionary about Sun Club's setup, the band's boundless fervor is sure to win you over almost immediately. I wasn't more than halfway through "Dress Like Mothers" before I had mentally committed myself to following this band wherever they wanted to lead me.

Not just in "Dress Like Mothers" but in all their songs - they charge in, ripping and roaring with a sort of barely contained chaos that's as impressive as it is endlessly endearing. The drums hit hard, the vocals are expressive and insistent even as they swing into harsh metal-reminiscent shouts (unsurprising considering Sun Club's member's metal roots), and the band is so incredibly locked in, it inspires joy and awe. Sun Club are a strong band but better yet, they're the kind of band where their enjoyment is clearly evident in the way they pour every ounce of their manic energy into their playing. The most surprising thing about Sun Club's vivacious brand of joyful rock pop with the occasionally punky vocals is just how quickly everything moves. There's no doubt each and every member of the band is enjoying their contribution to the song and yet it still moves at a relatively breakneck pace. That's not to say that the songs feel rushed or incomplete but some of their song's most memorable, infectious moments don't get to stick around all that long. And yet, even though their melodies may be fleeting that doesn't take a way a damn thing from Sun Club's jubilant performance-driven songcraft.

Sun Club's debut full length record The Dongo Durango is out now on ATO Records.
Posted by Dante at 10:14 AM No comments: