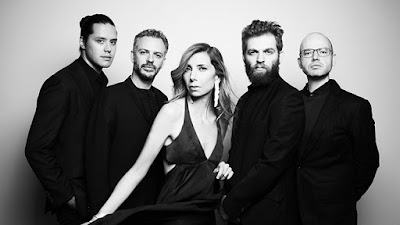 Despite the fact that they have one of the most rigorous touring schedules I've seen and released their brilliant new album Spontaneous Symbols just last October, string quartet Brooklyn Rider has somehow found the time to record a brand new collaborative album with Mexican jazz singer/songwriter Magos Herrera. Although the ease of the collaboration might've been helped by the fact that both Herrera and Brooklyn Rider are based in New York. Dreamers, the forthcoming album from Herrera and Brooklyn Rider follows in a long line of Brooklyn Rider's collaborative efforts with singer/songwriters like Bela Fleck and Gabriel Kahane but unlike those previous collaborations, Dreamers sets the words of poets like Ruben Dario, Octavio Paz, and Frederico Garcia Lorca as well as other singer/songwriters and poets to arrangements by Brazilian cellist Jaques Morelenbaum, Argentinian pianists/composers Diego Schissi and Guillermo Klein, and Venezuelan born multi-instrumenalist/composer Gonzolo Grau as well as Brooklyn Rider's own resident composer/arranger Colin Jacobsen. It's an example of classical music as a political statement not unlike Ravel's "La Valse" as the idea to craft an album featuring poetry from a multitude of Central and South American writers (and mainland Spanish in the case of Lorca), featuring arrangements from composers/artists who are largely from these places at a time of particularly anti-immigrant sentiment speaks volumes down to the name of the album.

Featuring the use of cajón and a pair of palmeras or hand clappers as well as Brooklyn Rider's incredibly sharp chops, "Niña" begins an incredibly percussive piece that roots Grau's arrangement of  Mexican poet Octavio Paz's piece more in flamenco than in salsa or tango. In contrast, Herrara's singing is fluid and melismatic with Brooklyn Rider occasionally mimicking to create moments of levitating harmonic consonance as Herrera underlines parts of the texts that are rife with spectacularly vivid imagery. A love song to his Paz's daughter, Grau's arrangements are incredibly dynamic - propulsive builds, cathartic releases, and dramatic shifts all aided by Magos Herrara's impeccable vocal talents, Brooklyn Rider's precision, and the addition of percussionists.

Dreamers, Brooklyn Rider's new collaborative album with Magos Herrera, is out September 21st on Sony Music Mexico. You can pre-order/pre-save the album here.
Posted by Dante at 3:53 PM No comments: 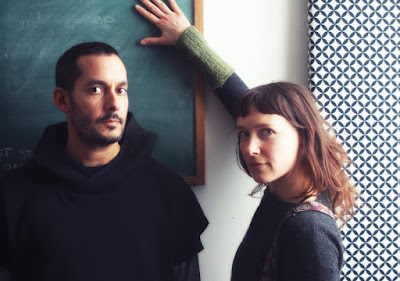 While Hudson, NY based experimental duo Buke & Gase have made sure to ease the wait between albums with one-off singles like "Seam Esteem", "Typo", and PJ Harvey cover "Dress" (which eventually all found their way onto the Arone vs Aron EP they released last year), there's been a bit of time since the release of their sophomore full length General Dome back in 2013. That's mostly due to the incredibly high standards and non-linear approach the tinkering inventors take towards creating their music - having scrapped an entire album's worth of material in favor of music that pushed their sound into previously unexplored territories and was thrilling for them to perform as well as record. Buke & Gase are one of those rare bands that answer to themselves first and foremost. And now after a nearly 6 year wait, the duo are back with the promise of a new record in the form of two singles "Pink Boots" and "No Land" that they've been incorporating into their live set since 2016.

"Pink Boots" is actually the second of the singles to be released, after they dropped "No Land" virtually in the dead of night on NPR's All Songs Considered last night. It follows the twosome's trademark embrace of cacophony with a noteable twist - since the release of General Dome, Arone Dyer and Aron Sanchez have incorporated more electronic elements in their song's composition than their previous modified guitar-bass and baritone ukelele from which the band summoned its name. But much like duo's effortlessly interwoven instrumental deluge of guitar-bass, buke, kick drum, and foot-trigged tamborine called the toe-bourine (another of the duo's innovations), Buke & Gase return with a similar everything-but-the-kitchen-sink style of composition. Though instead of relying on an awe-inspiringly dexterous ability to play everything - they've freed themselves up a bit - synthesizers taking the place of the buke, the boom of the kick drum compressed and digitized. At least in a live setting. In the studio - the duo are proven multi-instrumentalists chasing improvisation to their sometimes unexpected conclusions and committing them to tape.

Lyrically, "Pink Boots" is somewhat more vague than more obviously politically charged "No Land" but the sentiment is more or less the same. While "No Land" prophesies the fall of the corrupt along with everyone else due to the actions of the corrupt, "Pink Boots" serves up the how; as much of a societal critique as a critique of gender norms. Where "No Land" seethes with rage-tinged clarity, "Pink Boots" resorts to conversational slight of hand - relying on subtlety of intent, double-speak, and plausible deniability. "I'm better better better used at the table" Dyer sings above the din, the repetition of the lyrics as percussive as the accompanying drums.

"Pink Boots" and "No Land" are the first singles from Buke & Gase's forthcoming third full length album. Although information is still not readily available, the duo have put up a pre-order link via Bandcamp that gives you access to the two singles with full pre-order details to follow. Listen to "No Land":

While the debut full length album from Philadelpha via Athens experimental rock quartet Mothers When You Walk A Long Distance You Are Tired seesawed between sparse introspective lyrical moments and complex, interwoven instrumental pyrotechnics, one of the main differences I've noticed between the debut and previous singles "BLAME KIT" and "PINK" from Mothers' upcoming sophomore full length Render Another Ugly Method has been an all-hands-on-deck type of inclusion. Where their debut often saw Kristine Leschper's vocals under a perennial spotlight that occasionally saw the band lessening their intensity, on Render Another Ugly Method, the foursome have established a new dynamic: one that lauches Leschper's vocals right into the dense, instrumental din.

"BEAUTY ROUTINE", the third single and opening track from the forthcoming record establishes an unexpected moment of quiet, much more reminiscent of their debut while featuring the much more fractured lyrical style that Leschper's been exploring on this new record. Much like "PINK" was a series of vignettes, strung together by the particular feelings they evoked in Leschper, "BEAUTY ROUTINE" follows a similar style of disjointed narrative structure. There's no chorus, or even vaguely conventional approach to songwriting here as Leschper stretches and elongates the delivery of two rather brief verses. But much like an actual beauty routine, Leschper's lyrical delivery is methodical, gradually building and the rest of Mothers follow suit. It's not until almost two minutes in where the band snap into action from their previously listless expansiveness. Unsurprisingly it's also where Leschper turns her lyrical focus outward. It is slight but "BEAUTY ROUTINE" falls into Leschper's pervasive interest in the body as a malleable thing: capable of being expanded and contracted, and even abandoned completely. The first verse - aloft in a dissociative haze before a moment of jarring self-consciousness shifts the focus towards actually engaging with another person as the second verse's lyrics are about the self but delivered outside of the self. Much of the ethos of "BEAUTY ROUTINE" is a matter of Leschper's thought process during its composition but she lets others in, and none too gently with the song's final line: "Show me a beauty routine to erase me completely".

The music video, directed Jake Lazovick and Richard Phillip Smith, is a case of the visual enhancing the audio aspect as the ideas behind the track become the video's sole focus. Leschper carries a small hand mirror with her, glancing at herself in it but from the audience's perspective, you never get a good view of what she sees and the glances you steal into the mirror they appear to be reflecting something completely other than Leschper. Eventually Leschper does away with the actual mirror and decides to create a homemade mannequin in her own image: she gives it her own hair, models its appendages after her own and even dresses it up in her own clothes essentially creating the image she hopes to see in the hand mirror. Much like the video for "PINK" which was also directed by Lazovick and Smith, there's a creeping sense of malaise that lingers until the very conclusion.

Render Another Ugly Method, Mothers' sophomore full length album is out September 7th on Anti- Records.
Posted by Dante at 10:14 AM No comments: