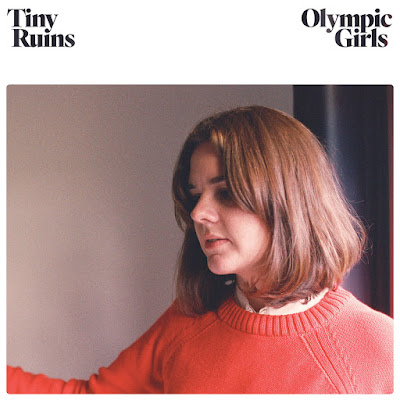 New Zealand singer/songwriter Hollie Fullbrook has never particularly been at a loss for words, able to stitch together incredibly evocation but succinct tales that seem exceptionally intimate and personal even while weaving dreamy narratives about priests flying high in the sky or carving out an elaborate backstory for a man Fullbrook saw in a painting. But "Olympics Girls", the title track and second single from her upcoming third full length album from Fullbrook's project Tiny Ruins, finds Fullbrook particular verbose in a way heretofore unexperienced.

"Olympics Girls" is a rarity in Fullbrook's oeuvre - a song that traces a delicately unfolding ramble in a way that seems particularly gregarious. Fullbrook has always adopted a conversational demeanor and her songs employ subtly evocative turns of phrase but on "Olympic Girls", particularly in the delivery of the line "You'll never find a thing if you can't lose yourself every once in awhile" Fullbrook takes on a Dylan-esque breathiness and windiness. Fullbrook makes a break from her normal narrative presentation to instead string together a series of incredibly descriptive thoughts - not completely separate from each other but not linked by an easily sought out structure. Instead, much like "How Much", Fullbrook appears to be continuing a conversation while providing ample details for listeners to catch up and the most stunning thing about "Olympic Girls" is how Fullbrook is able to imbue these particular lines with emotional resonance while abandoning familiar songwriting tropes.

One of the song's most winsome moments and an impressive thing considering it's the verse that gives the track it's name is how Fullbrook quickly dispatches: "You only had your Olympic girls, the frosted sheen of leotard twirls, running revolt and winning gold for the the TV screen before being led back to the cells". It's an exceptional bit of songwriting as it reveals quite a bit about both of the song's subjects but Fullbrook doesn't dwell - recognizes it's lyrical power enough to name the track after it but otherwise swiftly moves on. Fullbrook's never been one to lean too heavily on her multitudinous moments of lyrical prowess and it shows here as Fullbrook allows a newfound sense of wordiness to lead her to and from these breathtaking moments. Her language is still plain and unornamented as she allows not the particular words but the particular way she uses the word to stir up a feeling or color a scene in a splash of emotion. It's not completely unheard of but the way that Fullbrook continues to do such things is a marvel and she's able to do it in a way that feels as fresh as if she were doing it for the first time.

Olympic Girls, the third full length album from Tiny Ruins is out February 9th on Ba Da Bing in the US, Milk! in Australia, Marathon Artists in the EU/UK, and Ursa Minor in New Zealand. Pre-order is available now.
Posted by Dante at 10:22 AM No comments: 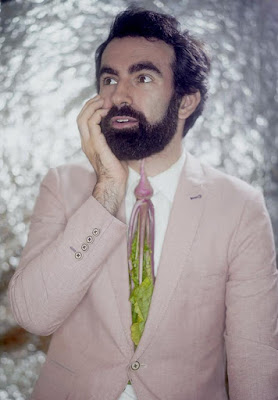 Brooklyn based singer/songwriter Adam Schatz likes to keep himself busy. Whether it's been touring with his multitude of projects Father Figures, Man Man, and Landlady over the years, his most recent stint supporting This Is The Kit on saxophone, or assembling an eclectic crew of musicians and collaborators in the form of Adam Schatz's Civil Engineering or for his annual Holiday Spectacular, he's made sure to keep his schedule sufficiently booked. His most recent endeavor: Transmissions from Landladyland Live!, an offshoot of his Patreon hosted monthly radio show, is a series of concerts where Schatz weaves solo performances, group improvisations along with interviews in a similarly communal spirit that Schatz treats most of his efforts. The fact that Schatz somehow had time to record the solo material he's been performing live for some time is a bit of a marvel. And yet, found the time he has and the first new songs from his newly announced solo project Landlady's Own Adam Schatz has arrived in the form of  keyboard-centric "Carolina" paired with a cover of Fiona Apple's "Every Single Night" Schatz arranged for saxophone and voice.

"Carolina" is quintessential Schatz, that pitch perfect blend of Schatz' jazz training, influences in funk and soul, and his effortless mastery of pop songcrafting. It's beginning is breezy and light featuring Schatz comfortably sat behind , and even though it's considered to be a solo effort, Schatz still enlists the aid of a couple friends and collaborators in the form of bartitone saxophonist Jonah Parzen-Johnson, trombonist Kevin Moehringer, and trumpeter Aaron Rockers as his horn section. As the songwriter behind Landlady, Schatz has often come up with beguiling song narratives that are more than your typical pop fare and "Carolina" is no different. However unlike songs like "Cadaver", "Girl", "X Ray Machine" even with the clues he offers, the actual subject of "Carolina" is a bit of a mystery. It's a song that essentially works - as all truly good pop songs do - on two levels. The first is the most universally applicable one of a sort of love-ish song; one that's not particularly tenderfooted. A tough love song as it were. Schatz in no uncertain terms essentially says "Get it together!". The second level essentially requires a bit of thought and cobbling together the pieces of the puzzle that Schatz provides. And that level exists for the music fans that enjoy a little lyrical analysis with their upbeat soul pop jam. But whether you belong to the first category of listener or the second, there's no denying "Carolina" is an absolute gem of a song - filled with unexpected moments like the brass breakdown at it's center which even still manages to surprise after countless listens.

No word yet if there's some sort of collections of Schatz songs forthcoming but he has promised plenty more where that came from so until then enjoy Schatz' take on Fiona Apple's "Every Single Night":