My introduction to Twain, the project of Brooklyn based singer/songwriter Mat Davidson actually happened several months ago in October when he opened for Kishi Bashi's Webster Hall stop of the Sonderlust tour. Armed solely with a guitar and his incredibly emotive yodel, it was an incredibly captivating set. After the show I immediately sought to acquaint myself with Davidson's catalog while also biding my time until an announcement of an album that would feature a number of the newer songs he had played that night (namely an absolutely emotional wrecking ball of the tune by the name of "Georgia"). The wait is actually why I didn't rush to feature him right away: I figured with so many new songs an album would surely be on the immediately horizon and I'd prefer to talk about beguiling man and his brilliant songcraft then. However after catching him again opening for the incredible Big Thief, it occurred to me that there really wasn't any good reason to wait. Davidson's music is stunning in its beauty and needed to be shared. On record - Davidson employs a host of musicians to fill in the spaces and it was a somewhat startling departure from the raw force Davidson taps into for his solo live shows. The songs still contain the same touching lyricism but there's something to be said for his calm, more measured delivery instead of his rafter-seeking vocals that easily overtake every nook and cranny of the room he plays in.

A member of Spirit Family Reunion (a fact I learned only after seeing him twice), Davidson's music is rooted in much of the deep American music tradition that serves as their inspiration: namely bluegrass, folk, and gospel. Though guitar is his main instrument, he's equally well versed in piano and fiddle, and these factor into his album efforts. Davidson's music deal almost exclusively with matters of the heart: the feeling of homesickness when you've been on the road for a long time, the blossoming feeling when you catch your lover off guard, Twain  is adept in this regard easily balancing these relateable feelings and subjects with winsome, simple presentation. Davidson doesn't engage in any extra frills: rather his vocals so consuming in their fervorous intensity serve as both the window and the grounding element of his music. Much like artists like The Tallest Man on Earth or Mandolin Orange the anticipation between albums is less about expecting radical tonal departures but rather what new lessons his distinct voice will seek to impart. With an album completed, it hopefully won't be too long before we heard Twain's new tales of love and woe and I couldn't be more invested.

Until his next album is announced cozy up with Twain's previous releases including the his recently re-pressed Life Labors In The Choir which you can order via Davidson's Bandcamp. He's also on tour with Big Thief and I strongly recommend catching both of them if they're in your city - you absolutely will not regret it.
Posted by Dante at 1:01 PM No comments:

Since releasing their first singles several years ago Living has gone from the moniker of Bergen based producer Lucas de Almeida into a full on full band endeavor. More so than on their debut self-titled EP new single "Path" is an explosion of their immersive tropical dream pop. Where de Almeida saw fit to sort of luxuriate in kaleidoscopic sound baths previous, "Path" kicks the energy levels up a notch as the track blasts off from it's very first note. The slow steady sprawl of songs like "Florahedron" and "Cerulean" are instead imbued with a forward momentum that's nothing short of breathtaking.

Living's songs are no less complex but it's beautiful music moments come at you faster and the band consisting of Sturla Kvernerg, Nora Tårnesvik, and new edition James Kalinoski of Flesh Prince makes the most of their live energy. The foursome harnessed this in previous single "Glory" and it's certainly good news that see that wasn't a fluke. The project has evolved considerably in the past two years or so and "Path" is a good indicator of what the band can sound like when it's firing on all cylinders. Hopefully the intricate nature of their song composition doesn't mean we have too long to wait before more Living tunes surface but in the meantime "Path" is more than worthy of a heavy amount of repeat listens.

If you haven't, listen to Living's previous single "Glory" released earlier this year and you can check out their brilliant self-titled EP via their bandcamp here. 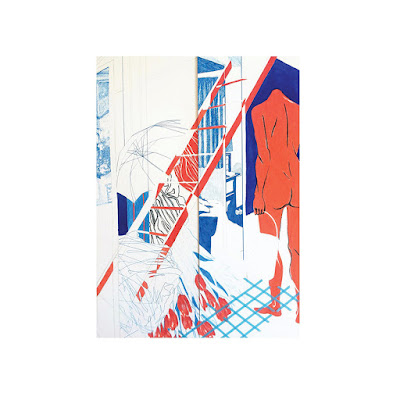 Through their rather short but somewhat noteworthy career Philly four piece Palm have crafted an oddly accessible though certainly off-kilter brand of noise pop. Since their inception at Bard College, the foursome have pushed themselves to explore new sounds and tonal dialogues that meant for fans of the band, you'd often hear a song once and then maybe never again or have to wait several months if not years become you could actually own it. The Shadow Expert EP is their latest release, following an absolutely full length debut Trading Basics.

While first single "Walkie Talkie" gives the impression with its ramshackle jangle that Palm are up to their old tricks, as the EP proceeds there's a growing persistence of melodic coherence. Not that Palm have ever suffered from a lack of coherence in the past but it's hard to imagine a song like the eponymous "Shadow Expert", with its clean, straightforward flow existing on Palm's Trading Basics. But Palm haven't left either their angular guitar lines or their complex, interwoven dynamic or their intricate, atypical rhythms behind. Rather Shadow Expert seems to explore the band dynamic on the most basic of levels by dialing down the fuzz.

Guitarists Eve Alpert and Kasra Kurt are locked in a dance that's not wholly unlike a changing bird formation. Where Kurt might take the lead with Alpert adding in little noisy flourishes, they're capable to shifting roles in an instant. That same sense of impermanence follows along in the vocal lines. One of the most delightful things about Palm's Shadow Expert EP is how fluid the whole thing feels. Buoying melodies and shifting figures both melodic and rhythmic give the sense that you're not entirely on solid ground. What's more, the EP progresses from harsh sounds to clean math pop right back to into harsher realms almost effortlessly. While Palm lean into their more pop sensibilities on the EP, there's a pervasive sense that noise is going to overtake everything laps at the sides of Palm's jangly art pop like oceans waves with varying intensity until "Sign To Signal" where it's presence is such a integral part of what makes it flow.

Given their constant pursuit of new and interesting sounds there's no telling if Shadow Expert is the kind of pop that Palm have been striving for or if it's merely a pitstop but it's an absolutely incredible entry into a diversifying catalogue that plays to their strengths while also exploring and establishing new ones.

Palm's Shadow Expert EP is out now on Carpark Records.

No disrespect meant to her longtime bandmate/songwriting partner Stephen Leisy but Genders' Maggie Morris distinct vocals have been one of my favorite elements of the band's continuous evolution. From the gauzy beach pop of Youth to their more psychedelic efforts as Genders and even their more shoegaze-oriented turn, Morris' emotive vocals have provided an excellent buoy in Genders' instrumental deluge. Much like fellow Portland friends Typhoon led to my discovery of Youth/Genders, it was only through them that I even knew Morris had begun her solo project Sunbathe. Enlisting Typhoon's Pieter Hilton on drums, Shannon Rose Steele on violin, and Devin Gallagher on tambourine, Morris' efforts as Sunbathe highlight just how masterful Morris' ability to pair heavy rock riffs with emotion-stirring vocals and memorable melodies. Though the lead track "Can't Find It" off her recently released debut reminded me of an alternate edit of "Never Belonged To You", much of Sunbathe exists in its own realm of similar but not congruent rock pop.

"With A Little Help" is a high point of the album featuring Morris at her brightest, most vibrant and taking what could be a radio-friendly pop effort and elongating its moments of small-scale magnificence. Though Morris has demonstrate a diverse range of songwriting subjects in the past/across other efforts, as Sunbathe, she sticks to basics: Sunbathe is an album filled with songs of love and heartbreak and where Morris really shines is in her ability to conflate the two. Morris' strengths have always lay in her pursuit of real, sincere emotions and real, earnest reactions and Sunbathe makes the most of that while also featuring incredible moments of tonal place-setting. Sunbathe is like a progression through the stages of grief, starting off breezy and sun-kissed and eventually ending up fully entrenched in darker textures and blistering riffs.


Sunbathe, the debut album from Maggie Morris' new solo effort Sunbathe is out now and available on digital, vinyl, or cassette.
Posted by Dante at 3:33 PM No comments:

Listen: Kinlaw - "drama in the south"

Considering how much SOFTSPOT appears to rely on singer/songwriter/bassist Sarah Kinlaw's ability to not only draw inspiration from unexpected sources but inhabit those circumstances so concretely that many of SOFTSPOT's songs seem like completely immersive experiences, the idea that Kinlaw had need of another outlet to express this caught me a bit off guard. In fact when she played a solo set last year I had assumed she would essentially be playing stripped down SOFTSPOT songs only to realize she had a whole body of work completely separate from her band of collaborators. "drama in the south", the first single from Kinlaw's upcoming solo album a trigger for everybody, essentially captures Kinlaw's artistic spirit in motion. Featuring fluttering synths, "drama in the south" proceeds much like an afterimage: Kinlaw's vocals stretching out, overlapping, and eventually enveloping everything. It's a song that draws on Kinlaw's wide variety of interests and talents: dance, music, art blending them. It's music inspired by an array of artistic disciplines and yet doesn't necessarily insist you be familiar with them to enjoy it. a trigger for everybody may be inspired by everything from sound effecting movement to ASMR but "drama in the south" shows that it's capable of standing alone on purely aural merits. Choreography and a sense of place may elevate it but "drama in the south" stands on pretty firm ground to begin with. It's an intoxicating bit of sweetly melodic art pop offered up without much in the way of pretension: a trait Kinlaw's songs with SOFTSPOT effortlessly share.

Sarah Kinlaw's first solo effort as Kinlaw a trigger for everybody is out June 23rd and currently available to pre-order on limited edition cassette from Soap Library. Kinlaw will also being doing a set of limited engagement shows at the Wythe Hotel on June 12th featuring choreography set to the album. You can score tickets to that here.
Posted by Dante at 1:36 PM No comments: