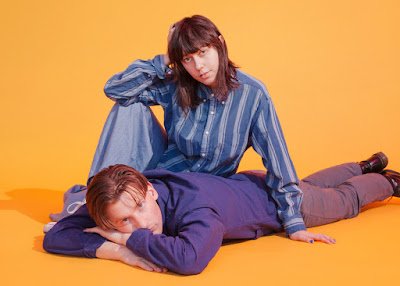 Since I was introduced to them at their CMJ set at Glasslands, it's hard to believe that electro-pop duo Blue Hawaii haven't released a new record since 2013's Untogether. Though of course this probably has to do with Raphaelle Standell-Preston's main project BRAIDS hitting a massive creative stride with 2013's Flourish//Perish that they've managed to keep the momentum with. But today Blue Hawaii are back with a new single and a new album on the horizon. "No One Like You", the first single from their upcoming second full length album Tenderness, is a characteristic slow burn blossoming from its sparse vocal intensive opening to a vibrant disco-recalling jam featuring a strings and a multitude of interest synth effects. It grows into arguably Blue Hawaii's catchiest song. A companion of sorts to "Taste" off BRAIDS' Deep in the Iris, where "Taste" was a piece of self-actualizing self-admonishment, "No One Like You" sways between highlighting your partner's strengths and what they bring out in you and a sobering rejection of idealization: "What if I remember only remember the good times/Would I be lying to myself?" Raphaelle Standell-Preston sings and

"No One Like You" is a far cry from Blue Hawaii's debut Blooming Summer EP: an occasionally confusing tale of growing pains, simultaneous full of love with heartbreak seeping in at the track's most resplendent moments. "No One Like You" is essentially a song about growing up and of love filtered through the self. Even its most praiseful moments; its most praise-seeking moments, the track manages to keep the focus purely on Raphaelle Standell-Preston's emotions: what is she getting from this? How is she feeling? It's a pretty unique take on the standard love song formula which so often focuses on the external. It also happens to be an absolutely groovy number where Blue Hawaii are at their most danceable, club ready. There's no telling if Tenderness will remain as musically upbeat or as catchy but "No One Like You" is an excellent introduction to the upcoming album and brilliant welcome back for the duo.


Blue Hawaii's second full length record Tenderness is out October 6th on Arbutus Records. You can pre-order the record now through the band's Bandcamp.
Posted by Dante at 2:19 PM No comments: