My introduction to Dutch violinist Diamanda La Berge Dramm came curiously enough when I was scrolling through Instagram. As I was mindless swiping through the stories of my friends and casual acquaintances, the sounds of her siren-recalling glissandos coupled by her featherweight vocals immediately made me pause. A whole host of questions immediately rose in my brain: who is this? Who posted this? Where can I hear more? Those questions were immediately answered as the poster was none other than Peter McLaughlin, founder of the Pretty Purgatory label, announcing a new single of Dramm's from the collaborative record from Dramm and English poet SJ Fowler Beastings.

Before even looking up Dramm's biography, I could tell Dramm had a reputation that far proceeded her simply after listening to more than the 14 second sound bite McLaughlin has unknowingly gifted me with. Dramm started violin at the age of four, studied at the New England Conservatory, Royal Conservatory of Music at the Hague, and has devoted much of her professional career towards the presentation of new music, founding Splendor, an artist collective and arts space in Amsterdam that regularly puts on concerts.

"Amazon", the second single from Dramm's forthcoming album Beastings, immediately hooked me with is juxtaposition of opposites - Dramm's vocals are light and airy against at first an effect not unlike a sliding trombone, and then a mounting cacophony of  Dramm caresses Fowler's texts holding them firmly aloft above them to set the mood but also to leap out among the fray of otherworldly sounds Dramm is somehow able to weave from her violin. Fowler's texts are elusive, weaving paths of serpentine grace as Dranm's accompaniment blooms forth, both occasionally dealing glancing blows at they intersect at just the right moments. "To be inside a background noise of a thing I don't possess" Dramm sings, accented by a rumbling low end.

"Amazon" is an excellent piece of songcraft - multitudinous in sound and meaning, a luxurious unfurling reverie that's both delightful simple and awe-inspiringly complex. It's a testament to Dramm's compositional prowess that she's able to craft such a lush backdrop of infinitely rewarding instrumental flourishes that doesn't distract from the simplistic but elusive beauty of Fowler's text.

Diamanda La Berge Dramm's Beastings is out November 22nd on Pretty Purgatory. It's available as a digital download, a rose colored cassette or as a CD with a chapbook featuring lyrics and expanded poens from SJ Fowler.
Posted by Dante at 12:41 PM No comments: 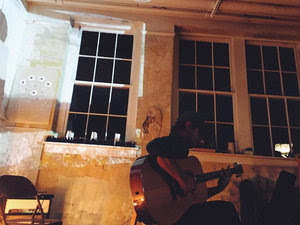 My introduction to Lake Mary, the Missouri based ambient folk project helmed by experimental guitarist Chaz Prymek happened, as all of my favorite discoveries tend to, by chance. I attended a house show to see proven favorites Ben Seretan and Cassandra Jenkins and was rewarded with the enchanting instrumental rambles of Prymek who was joined by Nevada Greene guitarist and Dismal Niche co-founder M. Crook as well as Ben Seretan on harmonium. The result was an absolutely spellbinding set of patiently plotted tracks that blurred the line between improvisatory ruminations and methodical compositions that kept the entire room in an awed hush. I was so won over by the set that when they mentioned they had another gig in town before heading back to Missouri, I immediately made plans to go and later, dug into the Lake Mary catalog. As a fan of long form compositions, Lake Mary's catalog was an embarrassment of riches full of solo works as well as incredibly fruitful collaborations recorded virtually all over the country which explains in some measure the expansive, windswept nature of some of Prymek's work.

"Sun Dogs", the title track from Lake Mary's forthcoming album out November 15th on, is an unofficial follow up to last year's River Ceremony and finds Prymek "getting the band back together" so to speak as Prymek enlists The Ranch Family Band again on this record with a few helpful additions (like Ben Seretan). While I associate Prymek's compositions as more of a slow burning amble, "Sun Dogs" is more brisk: a windows down drive instead of a exploratory stroll but the view is no less scenic, effortless conjuring images of sun drenched vistas and the wide open plain.

While "Sun Dogs" moves at swifter pace than most of Lake Mary's oevre, Prymek spins compositional gold out of repetitive themes, elevating them with virtuosic slide guitar, and employs dazzling builds that gives each instrument its time to shine and interact with its central themes. "Sun Dogs" is essentially through composed - shifting from one theme to the next without an attempt to double back. The bright frolick of Prymek's initial theme gives way to a looser, more spacious melodically suspended interlude with pulsating synths before shifting to a rollicking theme that expands on itself with graceful solos and a conversational interplay between its multitude of instruments.

Sun Dogs is out November 15th on Whited Sepulchre and Full Spectrum Records. Pre-order is available now.
Posted by Dante at 9:44 AM No comments:

Since meeting French pianist/composer Armel Dupas completely by chance, I have been taken by his unique approach towards music making in general, originally trained as a jazz pianist and enlisted as a common collaborator in a number of trios, quartets, film music composer, and touring musician, Dupas' first full length album Upriver presented interesting development of a style that remains distinctly indefinable. A blend of electronic and acoustic sounds that never overwhelm Dupas' gifts for delightful melodic songcraft or the seeming ease of his playing, it was a testament to Dupas' ability to conjure music of a sort of a romantic or impressionist mode without being wholly classical.

But Upriver was simply a beginning of sorts and since then Dupas has released two other albums in A Night Walk performed with Mathieu Penot and Kenny Ruby , and Broderies composed by Lisa Cat-Berro but recorded and arranged by Dupas. All the while developing a series of modern day salon concerts Dupas calls Home Piano Live that sees Dupas' touring and broadcasting these concerts through Facebook and Instagram Live.

The success of these concerts have no doubt had their effect on Dupas' creative process and the result is Automne 2019 Languère Song(s), a solo album recorded live in the garden at his home in France in one-take, and without any traces of electronic experimentation of Upriver or A Night Walk. "Loup Solitaire", the first single of sorts from his upcoming album, is a dreamy reverie not entirely unlike the introspective nocturnes that composed A Night Walk, the key difference being Dupas opting for absolute intimacy. There's no layers of synths, no other performers, just Dupas' whose melodies seem to tumble out of him unencumbered. "Loup Solitaire" is a beguiling piece that steadily builds on itself - slowly unfurling, Dupas' timing is truly what makes the piece work: his rubato passages creating a sense of a conversation among itself.

While initial establishing himself as one of the rare artists able to seamless blend electronic and organic sounds, Automne 2019 Laugère Song(s), offers a different version of Armel Dupas, one that thrives in live solo performance and one that few people get to see if they're not based in Europe where Dupas' tends to tour. In a way with both Home Piano Live and Laugère Song(s), is giving listeners a chance to experience Dupas' music in a brand new way, stripped back and intimate but still innovatively crafted and brimming with the confidence of a skilled player with a clear artistic vision.


Automne 2019 Laugère Song(s) is out November 15th on Dupas' Upriver Records. Pre-order is available now.
Posted by Dante at 10:01 AM No comments: