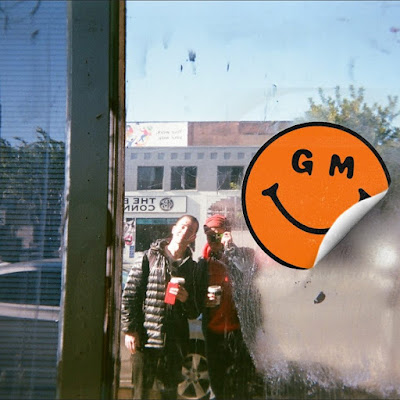 Since the release of their debut EP Ceremonial back in 2015, electronic duo Gilligan Moss have avoided a total post-release hiatus with a series of high profile remixes for artists like Tegan and Sara, The Dø, and Sébastien Tellier, as well as shows with The Knocks, The Midnight, and Toro y Moi all the while hinting at upcoming releases while balancing festival slots and dj sets.

Last year saw the release of two new tracks in the form of FoF compilation album cut "Mirror Mantra" and Our First 100 Days contribution "U Ruined It" and both were lower energy affairs that eschewed the floor-filling tendencies of their previous tracks and remixes in favor of a more mood music like vibe. Considering their methods of gestation and composition - "Mirror Mantra" a reflection of the duo's morning rituals put into music form and the political protest of "U Ruined It", it's hardy surprising that they weren't outright bangers but as the only original music released by the duo since their EP, it did bring to mind that perhaps downtempo would be the name of the game for their forthcoming release.

"What Happened?" arrives to articulately answer any questions for fans of the group that haven't been able to make it out to their live sets. Inspired by the same Upstate NY writing/recording retreat that bore "Mirror Mantra", "What Happened?" draws its influence from the wide expanses of nature instead of the bustling cities the twosome often find themselves in. It's not a totally alien concept - the inspiration for the digital coming from a return to more organic environments (just look at Photay's Onism) but Gilligan Moss put their personal stamp on it. Where "It Felt Right" introduced fans to their own produced vocals - "What Happened?" sees the dynamic duo back to their seamless editing of samples, maneuvering their multitude of densely textured layers into swift but surprisingly orderly formations - not unlike a flock of birds or a colony of butterflies. That sense of quickness; of urgency is intentional though. "What Happened?" is inspired by those moments in life that twist and contort you and that sense confusion and growth that await you on the other side. The "what happened?" that closes the song is meant in the purely literal sense as the climactic build subsides and gives you the chance to reorient yourself.

Gilligan Moss continue to operate at peak form - blending their experimental flourishes with universally enjoyable elements of dance to create rich, textural tapestries that are also so damn easy to dance to. It's a delicate balance: creating music that is interesting to listen to while also being accessible but Gilligan Moss have proved themselves time and time again both as skilled walkers of this particular tightrope but also as fearless producers capable of pursuing the path less traveled for a track with more depth. The result is dance music that appeals to music lovers in general - not just lovers of dance music and tracks that are beguiling distinct and effortlessly unpredictable.

Gilligan Moss' new single "What Happened?" is out now on AMF Records. Hopefully with more to follow soon.
Posted by Dante at 3:47 PM No comments: