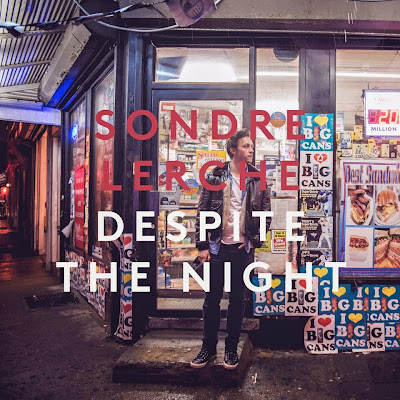 While hard at work on his follow up to last year's brilliant Please, Sondre Lerche understands the need to occasionally whet his fan's appetites. Ahead of his upcoming summer tour both in the US and in his native Norway, Lerche's dipping back into his unreleased song archives and combining one of his more recent tracks with his new-found enjoy of the all-mighty remix.

"Despite the Night",  a Please-era cutting room casualty, follows in the footsteps of party pop break up barnstormers "Bad Law" and "Legends" with its breezy melodies and effortless delivery masks an underlying disquiet. And yet despite its occasional dance-it-out vibe, "Despite the Night" finds Lerche more on the upswing than the shell-shocked and ruminating nature of most Please cuts. While Lerche avoided the tropes of your typical breakup record, its not hard to see why Lerche considered "Despite the Night" to be thematic inappropriate for the rest of that collection. There's a little too much light at the  end of the tunnel - "Despite the Night" plays off of serendipity and that feeling of uncertainty; but also new beginnings. "Despite the Night" is cautiously optimistic but also unabashedly fun. Maybe not to the point of "Bad Law" but it's a song that can be enjoyed based on Lerche' pop songcraft alone without the analysis of where Lerche's at emotionally in regards to the rest of Please. Distance will do that to you and something tells me Lerche's planned it just so.

Sondre Lerche's Despite the Night EP is out May 22nd and features a Trans-Atlantic smorgasbord of remixes from Bryce Hackford, Fancy Colors, Niilas, Stockhaus. Dates for Lerche's upcoming tour available for your perusal here. 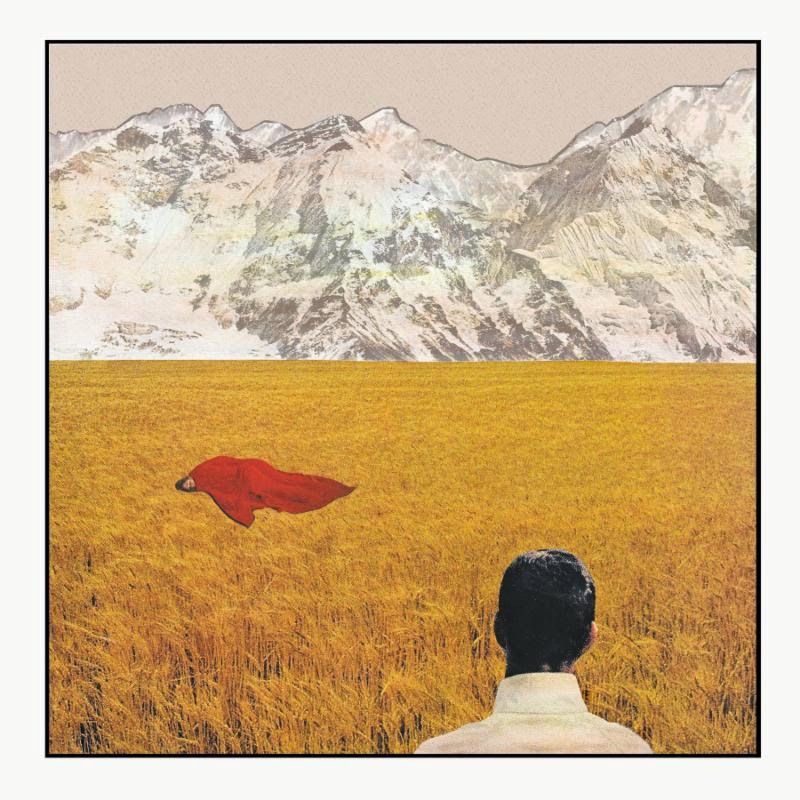 While I received my crash course in Lady Lamb during her opening set for Typhoon's show at Webster Hall I was struck almost immediately with the absolutely visceral nature of Aly Spaltro's lyricism. But that's just one of the various facets I found in Spaltro's lyrics when I had time to actually sit down and digest. Spalto is a charming storyteller - often threading more than a song's worth of narrative together to create songs that deliver in a way you don't quite expect. You're struck more by the feeling than by the evident though behind the linked verses. In a way Spaltro's lyricism has always been characterized by a bit of the surreal so that when it was announced that After - Spaltro's follow up to her tremendous Ripely Pine I was surprised and wary. Surreal is often a descriptor for weaker lyricists with potential for growth whose songs are mostly typified by nonsense ramblings. It was a descriptor that was strange to see bestowed upon Aly Spaltro but found apt for lead single "Billions of Eyes".

Though "Billion of Eyes" is full of Lady Lamb's trademark charisma, it was the first time I noticed the disjointedness of Spaltro's lyrics in such a glaring way. Ultimately about feelings of tour - Spaltro tries to capture the spirit of how little things essentially make life on the road liveable from creature comforts to the kindness of strangers. Spaltro never really travels off that course but it's the rare moment where you get the feeling that this is material for at least two songs. It's less of a sense of being overstuffed but when Spaltro offers an anecdote about how her grandmother's sister was deemed a saint and moved to the Vatican, it's a jarring disconnect. Luckily the song is a poppy folk rock confection so it still goes down easy but it was a worrying introduction into Lady Lamb's surreal new album.

Fortunately those worries were misplaced. On After, Spaltro takes full liberty with the narrative freedom a surreal venture gives her. "The vena cava, the most superior, the queen bringing blood into the chamber" is the first line uttered on After and appropriately sets up expectations for the album - namely to expect none. On "Vena Cava" and essentially all throughout After, Spaltro weaves between the mundane and the fantastical, between dreaming and waking state while also harkening back to Ripely Pine's signature moments ("Aubergine", "Crane Your Neck") more just in casual reference than any atempt to replicate their success. It's a subtle nod that establishes Spaltro's efforts to build upon her history instead starting completely from scratch each album cycle even as she embarks upon new methods of writing and production.

Spaltro hits a familiar note in "Sunday Shoes" which takes a grisly folk tale turn with a disarmingly sweet delivery. While her most violent moments where usually accompanied with an appropriate uptick in energy, "Sunday Shoes" proves that Lady Lamb doesn't always draw from the same well while also creating ones of the album's most devastingly beautiful moments.

Considering all Spaltro really had to do was just maintain, After more than delivers while containing enjoyable additions to Lady Lamb's rapidly growing catalog. Spaltro is growing comfortable with her riotous brand of folk rock without merely retreading is a commendable feat in itself. After is an album of considerable strength - of interesting, unique song structures and lyrical heavy lifting that's presented with a sense of effortlessness that still remembers to be ear catching and pleasant to listen to. While not particularly dense - After is the kind of album that rewards the listener with each subsequent listen as the reoccurring themes, repurposed ideas, and narrative links reveal themselves both the more and less you look for them.

Lady Lamb's latest album After is out now on Mom + Pop.
Posted by Dante at 12:46 PM No comments:

With the raucous power pop of "You" Brooklyn indie pop trio Pearl and the Beard ensured that the introduction to their upcoming album Beast every bit as triumphant as it deserved to be. The threesome were finally free from the confines of the studio, their record was successfully crowdfunded to completion, and they wasn't a tour date in sight. "Again Animal" find Pearl and the Beard in a slightly different place. Recently back from a slew of dates opening for Ani DiFranco, ready to embark on yet another with Pig Pen Theater Co, and with the details of Beast still more or less under wraps while they figure out how to distribute the damn thing "Again Animal" is a wonderful reminder that Pearl and the Beard are working their hardest and are here to stay.


The second song on the album immediately following "You", "Again Animal" dials down the sense of urgency but remains a similarly assured power pop confection. Where "You" functioned as showpiece for Jocelyn Mackenzie, "Again Animal" see-saws main vocal duties between Mackenzie and Emily Hope Price while bringing in Jeremy Styles for backing vocals and the resplendent harmonies of the chorus before turning his silvery falsetto loose in the song's climax. "Again Animal" is as much of an instrumental frenzy as it is a vocal one - built on Mackenzie's drumming, Styles and Price manage to find the perfect balance of percussive playing without losing any melodic power. There's a lot of arresting music moments to account for in "Again Animal" from its beautiful high-flying harmonies to its momentous surges.

Compositional dense but lyrically nimble, "Again Animal" is a multi-faceted track that shows off Pearl and the Beard at an obvious creative peak. That bodes well not only for the rest of Beast as each track proves itself even better than the one that preceded it but also for Pearl and the Beard in the long run. Here's hoping it's not too long now before Pearl and the Beard can show off their fancy new album and get to work on the next one.

Pearl and the Beard's third album Beast will be out later this year.
Posted by Dante at 11:53 AM No comments:

Listen: AURORA - "Running With The Wolves"

After nearly a half year between her debut "Awakening" and second single "Under Stars" Norwegian singer/songwriter Aurora Aksnes aka AURORA is thankfully releasing songs with far more consistency. After beginning the year with "Runaway" AURORA announced her first official release: the Running With the Wolves EP. The title track of her forthcoming Glassnote Records debut continues the artful blend of Aksnes' folk-inspired narrative lyricism and grandiose pop choruses with just the right touch of synth tone exploration.

Similarly to "Awakening" and "Under Stars" "Running With The Wolves" relishes in its momental buildups toward expectation-shattering grandeur. But unlike past singles with utilizes a sort of trapdoor reveal, "Running With the Wolves" reaches its climaxes with a wave-like fluidity. AURORA's casual glide into stratospheric choruses are just as gradual as its descent from them. It's a subtle back and forth that speaks to the musicianship of those Aksnes has chosen to surround herself with; able to push and pull along with her intensity without distracting from Aksnes' twinkling vocals.

AURORA's Running With The Wolves EP is out now on Glassnote Records.
Posted by Dante at 6:58 AM No comments: