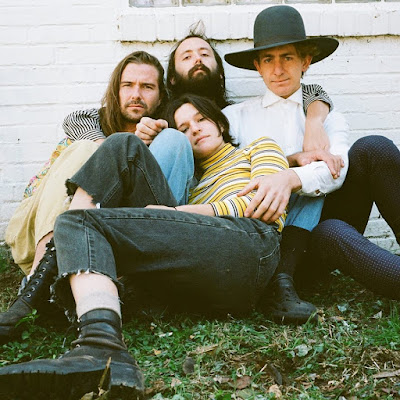 With the release of their brilliant sophomore album Capacity in 2017, Brooklyn based indie rockers  Big Thief found themselves at a crossroads of sorts: they were sitting on a treasure load of new songs (some of which they would sneak into setlists of their album supporting tours), they had plans to record and release them but also many of its members had aspirations of their own. Big Thief has always been a band made up of the sum of its parts and many of its members are active participants in others bands like Mega Bog and Twain. That the band somehow found time between touring, writing and releasing new material for their other projects, to also complete the writing and recording of a new Big Thief album so soon came as a bit of a shock to me and probably anyone else who has been paying attention. And yet, considering they released their debut album Masterpiece and its follow up Capacity a little more than a year apart, the announcement  that Big Thief latest album U.F.O.F. would be out this year is certainly a welcome surprise.

And maybe that's why Big Thief's return "U.F.O.F." sounds so refreshed. With Adrianne Lenker, Buck Meek, and James Krivchenia releasing markedly different albums last year, the band's return to form of sorts is far from more of the same. "U.F.O.F.", the second and title track from the band's upcoming third record and first on 4AD, arrives in a dreamy hush. Hardly surprising given it's subject matter is about extraterrestrial contact. And yet, Lenker's imbues it like she does all of Big Thief's songs with an inspired sincerity. There's a subtle electronic thrum and yet, the song pulses with a pastoral warmth, Lenker's wistfully tender vocals caressing vivid nature imagery and maintaining the human element. There is no fear of the unknown but a full on embrace of it and a sense of familiarity with the other.

I was introduced to now Durham based singer/songwriter and former member of Oakland collective Trails and Ways Madeline Kenney as a solo artist last year due largely in part to the role Jenn Wasner of Wye Oak/Flock of Dimes had in producing her sophomore album Perfect Shapes. Her lead single "Cut Me Off" was a such pitch perfect piece of vibrant guitar pop that I was instant on board and made sure to check in occasionally to see else she had up her sleeve.

Considering how closely they worked together: with Kenney living with Wasner out in Durham as they engineered Perfect Shapes, it's hardly surprising that two would stumble upon a kindred enough connection to collaborate further and the two wrote and recorded a split 7" together. The 7" is essentially a conversation of sorts between Wasner and Kenney as they navigate their positions as women in a male dominated industry. Wasner, an industry veteran for more than a decade, who at one time was so averse to being tokenized as the "woman guitarist" crafted a whole Wye Oak album without it to demonstrate her other talents and strengths, offers us a gauzy, obfuscation in "The Sisters". It is multitudinous in its production as driving bass lines, lithe guitar riffs, Wasner's aching, craning vocals, and a synth sheen are all blended into a hazy miasma of melancholy.

Kenney's part of the dialogue, "Helpless", is a sort of tongue-in-cheek but certainly no less sincere bit of roleplay. Vulnerability is the mark of any gifted songwriter but seems to be expected of any/every female songwriter and Kenney casts herself in that role: "Look me over, I am helpless" she coos and if her songwriting on Perfect Shapes' didn't reveal her as versatile songwriter/guitarist equally capable of vulnerability and fearlessness in equal measure, it might be easy to take the 7" track as characteristic, partially added by Kenney more or less playing her role straight. The lightness and ease that define much of Perfect Shapes is present with Kenney relying on lyrical specificity rather than verbosity. "What if they see me or worse believe me?" Kenney sings before a layered outro begins where verses are stacked upon each other and essentially are left to battle for dominance in a surprisingly orderly fashion. And it seems a worthwhile indication of Kenney's struggle in accepting the role of the helpless woman trope with her being perceived as truly a damsel in distress as the worst possible case scenario. It's a track of beguiling simplicity with Kenney's featherlight vocals providing an interesting contrast to Wasner's more grounded ones.

"The Sisters"/"Helpless" digital 7" is out now and with physical edition available from Carpark Records on April 16th. You can pre-order now.
Posted by Dante at 10:56 AM No comments: 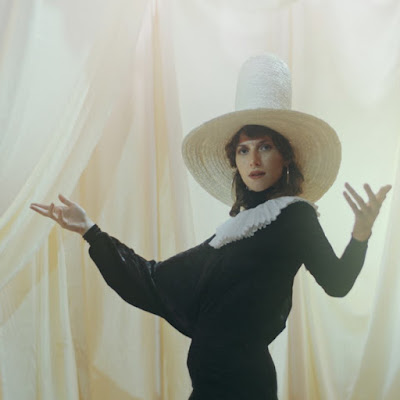 From the release of her debut self-titled album, New Zealand singer/songwriter Aldous Harding has made a career out of carefully plotted tales of love and all its disasters. With sophomore album Party, released by 4AD in 2017, Harding made a slight pivot from the creeping folk of her self-titled to a more polished production rooted more concretely in pop. The result was an absolute stunner of an album that didn't trade accessibility in for Harding's excellent though furtive lyricism.

"The Barrel", the new single from Harding's upcoming third album Designer, is the latest in her surreptitiously plotted oeuvre. Preferring poetic lyricism over narrative clarity, "The Barrel" leaves a lot to the listener's imagination in both its words and its accompanying visuals directed by Martin Sagadin and Harding. "The wave of love is a transient hunt" Harding offers up as bread crumb of the song's intent. Ultimately, though Harding's a deft hand with particular turns of phrase, Harding's real skill is encompassing a feeling that she doesn't feel the need to rely on narrative structure to convey. Her intent seems not to tell you anything you can't get a feel for from her words and her song's twinkling, dreamlike svelteness. And in that regard "The Barrel" succeeds: holding you in thrall with as Harding's vocals wash over you like siren song. For all the drama she can invoke with her vocals, Harding maintains a enchanting hush and in the video - maintains firm eye contact and a subtlety of motion. Ever choice seems tailor made to mystify while Harding seems to assert a sense of independence. "I'm not getting wet", "I'm not getting led along". "The Barrel" might be a love song of sorts but Harding quickly establishes it's not one where she's getting sweep along in the rush of it. She's clear eyed and, while not all together apprehensive, intends to be in control.

Aldous Harding's third full length album Designer is out on 4AD and Flying Nun on April 26th.
Posted by Dante at 10:56 AM No comments:

Though diverging life paths have found them almost on completely opposite sides of the US, Jenn Wasner and Andy Stack have hardly let that deter their work together as Wye Oak. While they released their fifth full length album The Louder It Calls The Faster It Runs just last year, that's hardly kept them from offering up more new music and much like Civilian preceded their previous Adult Swim Single "Spiral", Wye Oak are offering up a new track for the Adult Swim Singles Program in the form of "Evergreen". A mere few weeks old according to Wasner, the track tackles a period of seasonal depression as Wasner struggles to align what she knows in her mind and how she feels in her body. Wasner concerns herself with the bits and bobs of holiday preparation and post holiday recuperation. "Evergreen" is essentially a rallying cry - gentle but firm with herself, that trying is the only thing you can do. Force isn't an effective strategy in matters both emotional and psychological and Wasner, armed with that hard won knowledge, sets about building herself back up slowly but surely purely by trying. "Evergreen" is a placid tug of war between the churning maelstrom of depressive thought and the shining beacon of self awareness and self worth. Much like "Lifer" or "It Was Not Natural", it's a delicate piece of emotion-laden songcraft that succeeds by virtue of sincerity and patient composition even as Wasner and Stack chase dynamic highs and lows.