Listen: Sur Back - "Nostalgia in Motion" 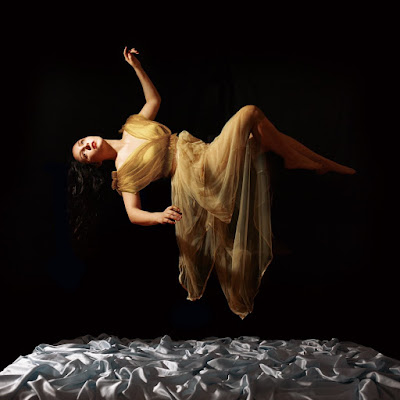 After the release of her follow up to her debut EP Kitsch last year, the appropriately titled Kitsch II, singer/songwriter Caroline Sans notably marked almost half a decade of intensive creative labor with a surprising amount to show of it. Several of the EPs songs had existed for several years since the very formation of her project Sur Back, surviving delays, setbacks and reworkings, and though Sans has been offering work at somewhat more consistent speed than before, hers is delicate work that benefits from the passage of time.

Like much of Sans' oevre, "Nostalgia In Motion" has been a work in progress several years in the making, meticulously thought artfully sculpted over a period of about three years while Sans was still based in Florida. From its fluttering start, "Nostalgia In Motion" is bright and expansive with elements of Sur Back's darker baroque pop turns - enriching it into a multifaceted piece of layered electronic pop.

With "Nostalgia In Motion", Sans continues her winning streak, crafting a song of arresting beauty that conveys meaning less through lyrical content and more through its production. Sans vocals are as richly colored as her brass riffs, her stutter-stop drums. "And I keep calling you back to show I'm not your nostalgia in motion" Sans coos and though the lyrics read as a sort of kiss off, Sans delivers them with a gentle caress, like sun steaming into a bedroom window. It's not meant to be a harsh wake up, but a soft rousing to exist in the present.

The lyrics all seem to build to this titular moment, the production following suit, and it's evident the idea means a lot to Sans; of not merely functioning as a walking, talking embodiment of good times past but wanting to be an active participant in life for better or worse. To weather whatever storms live may bring despite uncertain or a lack of control. "I can't hold on like I'm used to" Sans sings with an aching tenderness before "I'm not your nostalgia" hits like an ocean wave.

Sur Back's new single "Nostalgia in Motion" is out now. Sans is playing a single release show with Den-Mate, NOIEA, and Rare DM at Alphaville in Brooklyn on July 18th. Tickets and details available here.
Posted by Dante at 12:54 PM No comments: