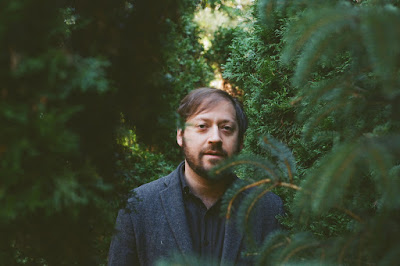 Well here is a pleasant surprise.  Although Brooklyn rockers Wilder Maker more or less just released their strongest album to date in Zion, singer/songwriter Gabriel Birnbaum somehow found the time and wherewithal to pursue a solo project. It is perhaps less of a surprise considering I knew he played one or two solo sets within the past year but not being present at those, I figured the sets consisted of stripped down Wilder Maker songs, song experiments and the like. Instead Birnbaum was playing actual songs he'd written and recorded, forming an entirely different band to record them even though he while premiering the song solo.

"Stack The Miles" is the first taste of Birnbaum's self-titled solo project and an album that'll be out in the new year. With Wilder Maker, Birnbaum already established himself as lyricist uniquely capable of wringing tension and a sense of drama from the mundane through longform narratives and shorter, more pop-oriented affairs, so "Stack The Miles" seems like a victory lap of sorts from the sort of elevated New York City narratives that comprised Zion, beginning with a pulse-quickening guitar riff Birnbaum's natural booming baritone is subdued, his lyrics a captivating mix of distinctly detailed lines and brooding impressionist watercolors. "Stack The Miles" is a song of interesting juxtapositions - a pervasive sense of quiet even as Birnbaum enlists Wilder Maker/Sam Evian's Adam Brisbin on bass, guitarist Will Graefe, and drummer/percussionist Jason Nazary to ensure the song is stacked with a multitude of sounds. The constant strum of a guitar gives the track a sense of perpetual motion even as it moves with both a casual lilt and the artful precision of a migrating flock of birds.

Narratively speaking, Birnbaum's still addressing themes of loneliness and beleagueredness but the venue's changed. Where Birnbaum filtered that into city life and instead it's the outskirts - towns, highways, and byways, that can swallow you up just as easily as the bustling city.  "Stack The Miles" is essentially a tour song but one where the road is a strange comfort but is too much unlike normal life that it's also cause for suspicion. It's a remarkably different take on the subject - artists usually longing for home for it's sense of stability whereas Birnbaum prefers home due to the balance of expectations. It's a bit cynical but also beautiful as Birnbaum sings "Too many miracles here and I can't no more of the good times I am done".