Listen: Young Dreams - "Of The City" 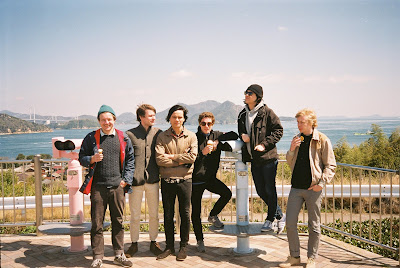 After releasing their impeccable debut album Between Places back in 2013, Norwegian power pop outfit Young Dreams more or less got immediately to work on their follow up before scrapping it and returning to side projects and solo efforts while other ideas percolated.  Guitarist Chris Holm put out his debut record Kilos as well as worked on/recorded new material with his other band Bloody Beach while multi-instrumentalist Matias Tellez produced several tracks on Sondre Lerche's seventh studio album Please as well as Lerche's Despite The Night EP and forthcoming follow up record. But after some time away the sextet are back with brand new single "Of The City".

While Young Dreams has largely rooted itself in a summery indie pop sound, Between Places and its supporting singles reintroduced the band as a far more arrangement heavy incarnation than their debut singles "Flight 376" and "Dream Alone, Wake Together". "Of The City" instead focuses in on the band's tropicalia and psych rock influences for a particularly groovy jam. It's a nimble gallop rooted more in synth tones than the band's previous efforts without completely redefining the band's core sound. The orchestral flourishes are more ornamental in nature and the Rune Vandaskog led track avoids layered vocal harmonies in favor of much more straightforward vocal delivery and interlocking grooves but the band's sense of musical escapism is alive and well.  Considering it was originally meant to feature choir and orchestra on the band's discarded effort, the rework of "Of The City" finds Young Dreams leaning more into dance and rock elements than the chamber pop of Between Places without losing any of its balmy breeziness. It's a decidedly different approach than originally intended but the finished work is a testament to Matias Tellez production talents. There's no
telling if the newly recorded replacement album will follow "Of The City" all that closely stylistically but it's a hell of a comeback that's guaranteed to help satiate fans until Young Dreams release their new album next year. Until more details roll out, welcome back Young Dreams.

"Of The City" is out today via the band's own new label Blanca Records.
Posted by Dante at 4:05 AM No comments:

Listen/Watch: Jinja Safari - "So Much" 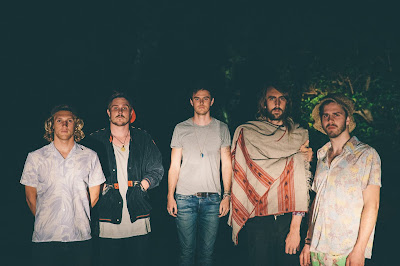 Earlier this year Australian jungle rock quintet Jinja Safari officially announced their break up following a hiatus that led to many of their members pursuing side projects in earnest. While a series of singles released last year were thought to be the last songs we'd hear from the fivesome, they just announced that later this month they'll release their final album together: a double album called Crescent Head named after chief songwriters/co-founders Marcus Azon and Pepa Knight's hometown.

"So Much", the latest single from the upcoming double album features a side of the band rarely seen: melancholic and introspective. It curtails the band's normal riotous energy in favor of taking stock of where they are. Few bands get to end the band completely on their own terms like Jinja Safari usually  disbanding due to in-fighting or external pressures but the band's choice to end things amicably has allowed them to do this victory lap of sorts.

The accompanying video cementing that by featuring footage of the band traveling and performing together over the years. It's not an entirely new angle for the band that's used similar footage intermittently in their music videos (last year's for "Find My Way" spring immediately to mind) but it gains a new sense of poignancy by showing the band never stopped having fun both with each other and their audience. It's not hard to see why the band returned to studio to whip up a brand new batch of songs in appreciation.

"So Much" works wonderfully as a send off as the band close this chapter and embark on different journeys - musically and otherwise. Thankfully for fans/listeners, it's not the very last we'll hear from the quintet before they turn their attentions elsewhere.

Part 1 of Crescent Head is out August 17th with Part 2 out August 24th.

After releasing the trailer for their upcoming sophomore record I We You Me at the very beginning of this year, Chicago art pop outfit Oshwa are finally offering up a much more substantial preview of what's to come with new single "Ultrafluorescent".

Directed by frontwoman Alicia Walter, "Ultrafluorescent" introduces a much more straightforward sound than the complex interlocking rhythms explored on debut full length Chamomile Crush. But breaking free from mathematical jams allows the life-affirming "Ultrafluorescent" to properly soar as it allows simpler pop conventions to carry its meaning. Big licks and vibrant coloring capture the fun of an Oshwa set as Walter sings of the joy of  being happy with yourself. "Ultrafluorescent" serves as a reintroduction to the project at Walter transforms it into more of a solo project but it's a welcome change that doesn't exact shuck its technical precision. Walter's voice is still capable of fantastic contortions and she still engages in some impressive technique when she finger taps out melodies on her guitar.  The project just isn't define by that anymore instead focusing on Walter's always winsome songwriting and knack for infectious melodies.

"Ultrafluorescent" is a wonderful introduction to Oshwa's second act. Lithe and powerful, charmingly simple, Walter puts herself wholly into the song and the project and it's hard not to fall for the absolute sincerity. I might miss the band's ability to craft song as wonderfully methodical and delightfully unique as "Old Man's Skies" but "Ultrafluorescent" highlights all of Walter's strengths that leave no doubts that the band's new direction will be equally as enjoyable.

Premiere - Watch: The Deloreans - "As Long As It's You" 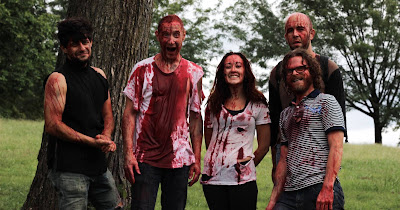 Considering their most recent album "American Craze" was released way back at the very start of 2011, it's certainly a welcome surprise to hear from Louisville rock pop stalwarts The Deloreans. The fivesome are essentially one of Louisville's best kept secret and the rare moment they can be convinced to leave all that hometown glory behind so I can see them is always a plus.

After releasing standalone single "As Long As It's You" back in 2014, The Deloreans have returned to offer up another tantalizing release to help bide the time between albums and already given the honor of writing about the single before for a premiere, I feel doubly so that the band sought me out once again this time for the music video directed by Neil James.

James' video takes inspiration directly from Jeremy Perry's lyrics shifting the portrait of intense, passionate love to a dance piece. Much like the The Deloreans' track from which he was inspired, James' pairs the beauty of composition - in this case a lovely night scene lit with dozens of little lights with a slow-burning fury in dancers Mimi Hutchinson and Michael Nguyen as they play out a love story from its euphoric highs to its fiery lows. With only their costumes and the scene behind them not obscured in completely darkness - the narrative relies less on the expected ways to depict conflict: words, facial expressions and instead places the importance fully on the  visual components: the increase of dizzying camera shots, rapidly shifting angles, and of course the dance itself which proceeds from a playful song and dance, a chase, a romantic two-step, to violent leaps.

In case you missed it, you can listen to/order The Deloreans' "As Long As It's You" 7" now in its 2nd pressing here.