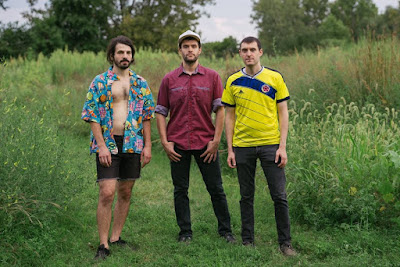 I was introduced to Philly synth pop duo Son Step when I attended a fundraiser show for American Immigration Council they put on at Threes Brewing last May with Renata Zeiguer, Wilder Maker, and Zula. I went exceptionally familiar with Renata Zeigeur and Wilder Maker and had at least heard of Zula but Son Step were a total unknown to me and their set absolutely surpassed any possible expectations I could've formed. Jon Coyle and Joel Gleiser were essentially sat adjacent synth setups and created an immersive wash of kaleidoscopic melodies that held me completely transfixed until even after their set's final notes. They had mentioned that both the setup and the songs were mostly new and I was incredibly intrigued. Their songs were incredibly lush despite the fact that they were essentially stripped down. Though I haven't been able to see Son Step live again since but at the very least the duo have announced their third full length album Fossilillies, introducing it with "Saucy" recorded with former members Chris Coyle and Matt Scarano.

"Saucy" is an absolutely resplendent piece of multi-textured bliss pop. It's a buoyant, jubilant ode to thoughts and feelings that are utterly indescribable. And the duo don't really intend to try. Their lyrics evoke quiet little moments to create emotionally resonant echoes in lieu of actual explanation. Coyle and Gleiser's vocals are effortlessly intertwined into radiant harmonies, absolutely in line with the song's vibrant coloring and light-centered lyrics. Their vocals weave serpentine swaths, stratospheric arcs, and glance like skipping stones on sun dappled waters all the while they create effortlessly dreamy layered soundscapes to accompany them.

Fossilillies, Son Step's third full length album is out May 17th on Grind Select. You can pre-order the record now.
Posted by Dante at 9:18 AM No comments:

Despite releasing her debut full length album Old Ghost just last year, singer/songwriter/multi-instrumentalist Renata Zeiguer has already hard at work on its follow up. While the product of that particular effort remains to be seen for the time being, Zeiguer is offering up an EP called Faraway Business featuring two covers and two alternate takes of Old Ghost tracks "Gravity" and "Wayside".

"Chega de Saudade" is a cover but holds such a place in Zeiguer's musical DNA that not only has an English translation of one of its lyrics inspire the title of Zeiguer's interim collection of songs but she returned to it as a way to sort of center herself musically. Originally written by Antônio Carlos Jobim and Vinícius de Moraes and popularized by João Gilberto as a single and also by his album of the same name, Zeigeur tries to achieve a similar intimacy of the original while also experimenting with Ace Tone drum machine from the 60s. For old and new fans of Zeigeur alike, "Chega de Saudade" provides a raw glimpse of Zeiguer's musical influences and tendencies stripped free of Zeiguer's stellar layered arrangements. While Zeiguer's musical history in classical and jazz can be gleaned in her approach both to her own project and involvement in others, her sparse rendition of a bossa nova classic really snaps into focus how much musical styles that are widely characterized by their subtlety has informed Zeiguer's own approach to both songwriting and arranging.

Faraway Business is out April 12th on Northern Spy Records and is available for pre-order now.
Posted by Dante at 10:49 AM No comments: 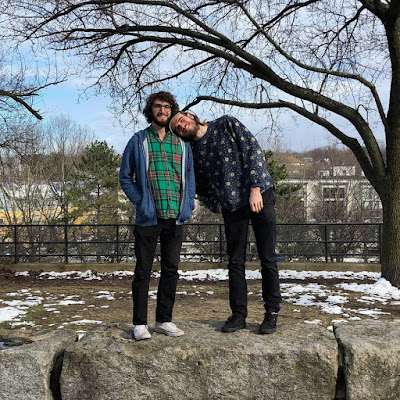 When I was introduced to the now Philly based duo Boon, it was more or less during a transition period for them. The band had moved from Brooklyn to Philly and effectively shifted direction due the logistics of having half of its band members in different cities: in fact after my initial introduction to them, the following times I saw Boon the sets mostly consisted of Brendan Principato and Drew Sher creating an almost impenetrable mesh of vocal and guitar harmonies and workshopping songs that would eventually become their forthcoming record All Of Us Laughing.

Firmly settled, the band has gone from quartet to duo and back to quartet again and I was interested to see how that would effect their sound which seemed to thrive during this period of displacement. Where previous album effort There's No Saving This House was a beguiling mixture of atmospheric multi-layered drone folk, the Boon I encountered live eschewed both their slow burning tendencies and noisier elements in favor of simpler but no less luxuriant presentation. "Jasmine Seeds", the first single from All Of Us Laughing, finds the sort of middle ground between these two stages of the band. It's a vibrant harmony laden reverie that entrances through its resplendent amble but with drums to keep the pace. It's a song that can seeming go on forever as you're drawn in both by ease of Principato and Sher's vocal harmonies but also the emotiveness they reach during the song's peak but the duo steer the song through minimalistic changes until they finally bring everything to a cacophonous stand still. It's a lovely return from the band and one that ultimately captures the spirit of their creative problem solving and musical talents.

All Of Us Laughing is out March 29th on Boon's own tape label Glass Orchard. You can pre-order the record now.
Posted by Dante at 2:33 PM No comments:

Listen: Truth Club - "Not An Exit"

My first encounter with Raleigh pop rockers Truth Club, then a trio but since expanding into a four piece, was in Neptunes on the 2nd night of Hopscotch Music Festival in 2017. I was instantly taken with the band's dynamic - churning around vocalist Travis Harrington with an energy both frenetic and breezy and ability to shift tempos and moods with an impressive amount of ease. It was the strength of that set alone that marked them as a band to watch in my mind even as they seemed relegated to being one of the Raleigh music scene's best kept secrets. With "Not An Exit, the first single from their upcoming debut full length of the same name, the band are making a splash on a much larger stage.

Their first release since 2017's two song release Interest Meeting, "Not An Exit", with it's sightly off-kilter jangle, quickly establishes itself as an inescapable ear worm before guitarist Travis Harrington's vocals even enter. And when they do, they're a kind of unassuming half mumble that make it all the more effective when certain phrases leap out at you. Harrington is the kind of songwriter that doesn't assume everything he has to say is profound and with that freedom ends up creating some pretty stirring turns of phrase. "Not An Exit" essentially deals with the body as a prison. No matter how confidently you grew up or how normal or cool of a life you've lived, we've all had at least one of those moments that were so jarringly awkward that you've contemplated an escape from your own body; to wink out of existence. Harrington locks onto that in "Not An Exit" but also offers that regardless of how much you might want to escape its inescapable confines, the body is your home. While "Not An Exit" draws its inspiration from the anxiety of post-adolescent youth, it's charmingly mature even avoiding some cliched "it gets better" ending. No, Harrington's closing remarks: "There's not an exit from a form and there's never gonna be" is much more true to life while also striking an uplifting chord. You can't escape your body or its flaws but you can get more comfortable with them and hunker down for the long haul.

Listen to "Not An Exit":

Truth Club's forthcoming debut full length album Not An Exit out May 3rd on Tiny Engines. You can pre-order the record now on digital or limited edition colored cassette.
Posted by Dante at 10:37 AM No comments: