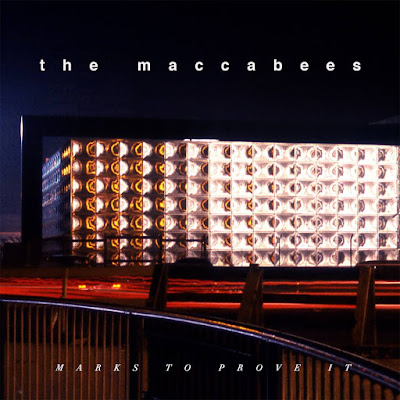 If you're lucky enough to find the right band at exactly the right time it can be absolutely thrilling and rewarding to watch a band grow. The growth doesn't always have to be this massive chasm of development either; incremental steps and subtle tweaks over time, much like minimalism, can result in as equally rewarding as a band fearlessly leaping into a new sound entirely. That's essentially been the path London indie rockers The Maccabees have charted to their fourth and latest full length record Marks To Prove It.

While never quite a quiet band The Maccabees have managed to fill their sound out in a way that's a far cry from their debut Colour It In. Though they've managed to graduate to large venues and festivals in their native UK, the quintet don't quite fall into the arena rock category. In fact Marks To Prove It more closely resembles The Walkmen's most recent pre-hiatus endeavors than fellow Mercury Prize nominees Alt-J, Foals, or Arctic Monkeys more stadium ready sound. While title track and album opener "Marks To Prove It" surges forth at a full on sprint, it's a far more measured build with various ebbs and flows that vastly improves on the band's initial characteristic insistence. Or "Kamakura" with its swaggering bass-centric groove that gives way to a smoldering, slowed down coda. Marks To Prove It is an album fueled by its own momentum; its songs often driving its one varying musical moments right into the next. That said, it's not the sort of album that rushes to it's eventual finish line. The pace is comfortable, occasionally brisk but always scenic hitting moments like "Spit It Out": a gorgeous buildup leading to a effect not unlike a volume knob being slowly turned up that gives a sense of pre-established continuity. Even in their more toned down tracks like "Silence", "Pioneering Systems" and album ender "Dawn Chorus", the fivesome manage to keep just enough of a forward push that there's little room for boredom to set in. That and The Maccabees take full advantage of their musical pals - bolstering the album with string arrangements, trumpet, saxophone, and the appearances of friends like former Stricken City frontwoman Rebekah Raa on backing vocals and piano.

Ultimately Marks To Prove It is an album that synthesizes everything that works well with the band from Orlando Weeks' lilting vocals and the band's familiarity and maturity, and pairs them with an abundance of musical ideas that are carefully utilized and inventively deployed. It's the rare record that plays very much like a full piece of music throughout regardless of the singles' very real staying power and even manages some moments of understated but effective lyrical excellence ("River Song" springs immediately to mind). Marks To Prove It is a testament that The Maccabees broader audience appeal isn't synonymous with broader approach in sound. There's a lot of grab onto on Marks To Prove It but it's achieved by focusing inward, not outward, for inspiration and presentation.

The Maccabees' fourth full length record Marks To Prove It is now out digitally in the United States on Communion Records with a physical release hopefully soon to come.
Posted by Dante at 12:55 PM No comments: