My discovery of Chicago duo OHMME (formerly Homme) is a combination of constantly seeing former Red Eye Chicago writer Josh Terry gush about them and actually hearing their song "Woman" off their self-titled EP used by Ryan from Ahleuchatistas to promote a show he's playing with them later this month. While I certainly should've jumped on the suggestion the countless times Josh Terry inadvertently recommended them, it was actually hearing them that led to me being instantly charmed.

Though there's probably tons that can be said about the serendipitous linking of Sima Cunningham and Macie Stewart though the free improv scene in Chicago, the main focus should be on the fact that Cunningham and Stewart create songs that achieve a pitch perfect balance between indelible pop melodies, experimental sounds, and gorgeous vocal harmonies. Take "Woman" which begins with sharp guitar jangle before the duo's vocals enter with perfect harmonic softness, it's an immediate juxtaposition of opposites. That's to say nothing of the sweet dissonance of the song's chorus. OHMME are a band of opposites but also a band able to blend together those very parts in something notable. At once abrasive then soothing, OHMME is a dynamic band that filters their various influences into an intricately layered avant pop masterpiece.

The duo are able to weave together a sound that seems a hell of a lot bigger than just two people can make. Like "Fingerprints" which you swear is the result of some wonderfully deployed vocal effect but is really just the sound of Cunningham and Stewart being effortless in sync as they rapidly play off each other. It's a level of mind-boggling synchronicity that immediately brought to mind Jess Wolfe and Holly Laessig of Lucius or frequent Son Lux collaborators Lily & Madeleine. And yet, OHMME is thankfully a band all their own. Their self-titled EP is a stunningly versatile work filled with both aggressive rock pop numbers and mellower vocal showcases sometimes even in the course of the same time like see-sawing "Furniture".

OHMME have been creating music together for years and their EP is a testament to both the talents Cunningham & Stewart and the seemingly limitless creativity of their bond. Hopefully it's not another three years before the duo put out another record but if it takes that long to get a record as unique and enjoyable in sound as the EP, it'll be well worth the wait.

OHMME's debut self-titled record is out now on Fox Hall Records. You can snag it via the band's Bandcamp.
Posted by Dante at 4:19 PM No comments: 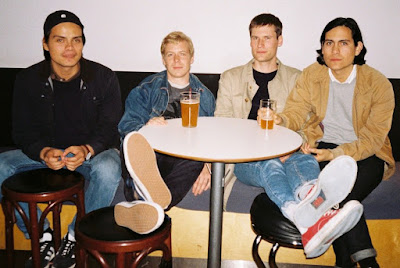 Much of the career of Norwegian pop rockers Young Dreams both before and after their stunningly great debut Between Places has been trying to achieve an artful balance of boundary-pushing and leaning into the pop sounds that inspire them. On Between Places, it resulted in a sprawling, lush work of beguiling symphonic pop. Much of Young Dreams' work after has been much more experimental, chasing melodies or ideas that appeal to them while attempting to inhabit them in a way that feels real. There's no denying that the current trend in pop music has influenced producer Matias Tellez. From "Of This City" to "Sinner (I'm Sorry)" to "My Brain On Love", the second single from their upcoming sophomore effort Waves 2 You, the touch of autotune is all the proof you need of that.

"My Brain On Love" functions as a bridge of sorts between these two versions of Young Dreams. Where "Cells" introduced a much more sustainable form of electronic experimentalism and incorporating influences than the much more R&B reminiscent standalone singles, "My Brain On Love" rectifies Tellez's production talents with the band's knack for winsome melodies as well as their shifting genre proclivities. Young Dreams have never particularly been a band beholden to the notion of genre even though Between Places often ended up at the chamber pop/symphonic rock end of the spectrum but the band know their way both around trippy psychedelics and full-bodied synths and "My Brain On Love" relies more on these than anything. It's a song that undergoes a great deal of metamorphosis from its autotune laden intro to its more straightforward clear-cut melodies that bop along to sprightly grooves to an unexpected bit of distortion,, the band tackle these various moving parts with casual ease.

Young Dreams' sophomore full length record Waves 2 You is out January 12th on their own Blanca Records. You can pre-order the record now through their Bandcamp.
Posted by Dante at 12:45 PM No comments: 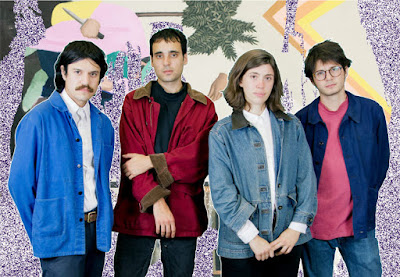 Although the bulk of Philly based rock pop experimentalists Palm's ouevre relies on the interplay not only between guitarist/vocalists Kasra Kurt and Eve Alpert but all four members of the band in general, "Dog Milk", the second single from Palm's upcoming sophomore full length Rock Island, takes the method to its compositional and technical climax as Alpert complements Kurt's lead vocals with both melodic and rhythmic asides.

Album opener and first single "Pearly" introduced fans to Palm's new experiments with electronics and synths and "Dog Milk" continues right along in that regard as drummer Hugo Stanley joins in with Kurt's MIDI triggering as well as accompanying his already pretty full-bodied percussion with electronically prepped drum beats. Though the band has accessed a broader range of sounds mainly through the use of effects pedals, the band's use of electronic further blurs the already hard-to-believe multitude of sounds the band are able to pull from their instruments.

There's been no shortage of experimentation in Palm's short but notable history as rock experimentalists and yet still "Dog Milk" serves as an incredible combination both of the band's far more recent leaning into their pop sensibilities as well as the insertion of electronic elements into their songs. It's a perfect storm of their incredibly engaging technical pop rooted in their mathy dressings as the band continue to pave their own way with increasing original takes on genre bending rock music. The occasional harsh abrasiveness of their debut full length Trading Basics has given way to much more tuneful efforts in their Shadow Expert EP and "Dog Milk" proves that there's still plenty of room to explore in this more accessible sound as the band create an incredibly full track that expands their textural palette in exciting new directions while also incorporating elements of what makes Palm such an interesting band to listen to: namely their technical precision and propensity towards rhythmic complexity.

"Dog Milk" might be Palm's poppiest track to date but it is also their most subversive as the band complicate would-be descriptors even further. Palm have never been a band easily described by labels but "Dog Milk" and Rock Island are shaping up to trip up longtime fans as they explore new creative avenue and jerry-rig an impressively pleasant brand of Frankenstein-ed guitar pop that borrows elements from all manner of music to bold establish itself as wholly separate. It bodes especially well not only for their eagerly anticipated sophomore record but also for the foursomes continued creative output. 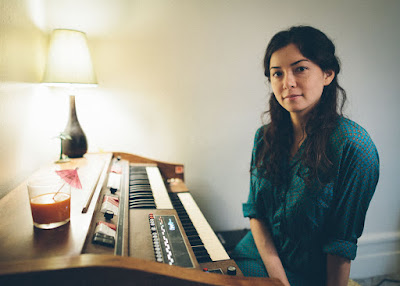 Despite the fact that Brooklyn based singer/songwriter/multi-instrumentalist Renata Zeiguer's last official release was her Horizons EP under her moniker Cantina (while releasing a series of bedroom demos intermittently after), it really hasn't been that long since you've heard her. From featured vocals on "Santa Carina" on Vensaire's final release JANUS back in 2015 and more recently, violin on Cassandra Jenkins' Play Till You Win, or back up vocals and strings on Landlady's The World Is A Loud Place, Zeiguer's been a quiet contributor to a lot of my favorite songs and albums all the while plotting the next course for her solo material. Enter "Bug", the first single from her debut full length album Old Ghost.

With "Bug", Zeiguer continues to offer up more of her delightfully melodic indie pop. Reclaiming Cantina as a project by her own name, "Bug" is a wonderful reintroduction full of clean melodic lines and similarly uncluttered harmonic layers. Zeiguer's songs have always balanced clear-sighted unfettered melodies and lush arrangements and "Bug" is no different as Zeiguer's vocals are largely unencumbered by her compositional aims. "Bug" is surprisingly spacious and free given Zeiguer's propensity for sudden bursts of textural complexity but that also highlights her winsome lyricism which continues to be dynamic in its originally and the unique timbre of her feather light vocals. A gifted composer as well as musician, Zeiguer knows her voice the best and her arrangement seek to elevate instead of muddle it. "Bug" is a swift moving slice of breezy guitar pop with subtly deployed pockets of rich textural depths. Zeiguer's solo debut has been a long time coming and "Bug" shows that she fully intends to make the most of it.