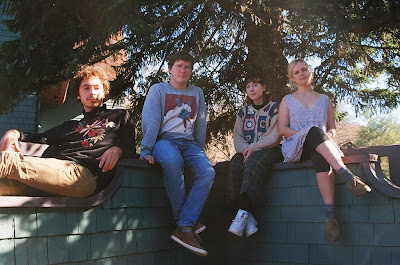 My introduction to Asheville's Wednesday actually happened from an inside joke a friend of mine made on social media. I didn't get the joke but knew that a band was being mentioned and when I saw they were slated to play Hopscotch Music Festival, I made a mental note to try and see them. When a schedule conflict and my own unpreparedness made me miss their Hopscotch set I kept the name in my mind. Then as Wednesday set about to tour behind their recently released sophomore full length I Was Trying to Describe You to Someone, I noticed they were touring alongside a bunch of new friends I had met at Hopscotch last year. That practically sealed the deal and I finally dove into their music.

The first thing I was struck by was the incredibly insistent nature of Wednesday's songs. The album's opening track "Fate Is..." begins like a thundercrack, a lion's roar. It's heavy, clamorous intro perfectly suited for singer/guitarist Karly Hartzman's seismic, emotive vocals which soon follow it. It's a track that begins at a gallop and doesn't ever really let up while still balancing its boisterous instrumentals with Hartzman's narrative persistence. It's the album's shortest track but also its most succinct. The polar opposite of a tracks like "Love Has No Pride (Condemned)" which takes its time with its build up; shifting gears a number of times between vignette like verses.

As the album progresses, its songs get longer, Hartzman's vocals more langorous but similarly capable of dispatching the emotive truth of a lived experience with an impressive brevity. Hartzman's hardly curt but has a knack for employing descriptive storytelling with an anecdotal ease. The quintet are properly dialed in, turning in properly cacophonus dips into darkly tinged shoegaze fuzz without obscuring Hartzman's narratives in the slightest.


Wednesday's sophomore record I Was Trying to Describe You to Someone is out now on Orindal Records. You can stream/buy it here.
Posted by Dante at 10:28 AM No comments:

My introduction to percussionist Matt Evans happened essentially by chance after attending a show featuring Ben Seretan and Boio. I hadn't seen either project in quite some time and was thrilled to see what both were up to but Matt Evans' immersive soundscapes were easily my favorite part of a night filled with four incredibly engaging sets. Part of Evans appeal lies in his ability to shift through tools and sounds in a "everything but the kitchen sink" approach without losing anything resembling clarity of tone or ideas. Even watching him make the sounds, the precision and playfulness was entrancing, the effortless blend of organic, man-made sounds created in the moment and electronic sounds previously constructed, created an elevated moment of absolute wonder.

"Cold Moon", the first taste of Matt Evans forthcoming full length record of experimental percussion New Topographics, is a slice of temporal displacing ambience. Awash in a digital sea of sound, Evans creates a lush tapestry of seemingly miniscule little moments that almost immediately slip you into a moment of zen. It's surprisingly busy, Evans swapping out soft brush strokes for chimes and bells, all against a backdrop of a lulling electronic hum and subtle drip. It's oddly meditative despite the fact that Evans is constantly in motion.

Matt Evans' New Topographics is out April 17th on Whatever's Clever. You can pre-order the record on vinyl, cassette, and digital.
Posted by Dante at 3:07 PM No comments: