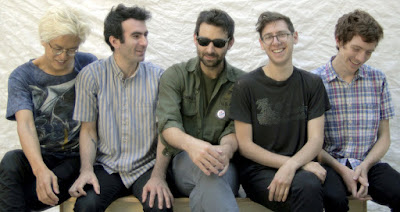 A couple weeks back Brooklyn based quintet Landlady announced The World Is A Loud Place, their newest collection of jams out early next year and solidified the announcement with not one but two cuts from the upcoming album. Turns out releasing songs in pairs wasn't just a one-off decision as we once again get a twofer in the form of "Nina" and "Solid Brass". Much like "Electric Abdomen" and "Driving In California", the juxtaposition of the two songs makes them all the more enjoyable. The fact that "Nina" and "Driving In California" come one after another is another piece of the puzzle of how the album might proceed but if I've learned anything from the quartet it's to expect only the unexpected. The fivesome are a wildly inventive collective and Adam Schatz's gift of pulling inspiration from anywhere and everything means the songs can be about pretty much anything and are all the better for it.

"Nina" is not the sort of song that gives up its secrets easily. And that's OK. It's enjoyable regardless of your ability to piece together Schatz references. Landlady have never been the type of band to retreat into mysteries and they don't do so here. "Nina won't you let me be a servant to your every word"/"Nina won't you let you be a servant to your every breath" are Schatz's only mentions of the eponymous vixen and your interest in deciphering her importance has a lot to do with how Landlady play with form on the track. After an establishing main theme of the chorus, the band shifts to a sparse cantering section filled with climbing guitar figured and alternates between the two before finally giving way to a completely new third section. Schatz's love songs have never been explicitly just that but "Nina" is handled with sort of reverence and the sense of storytelling that comes through at not just a lyrical but at a band level ensure that its sense of admiration is handled thrillingly.

"Solid Brass" forms a sort of counterpoint to "Nina" both in form and vision. The love in "Nina" in a galvanizing one based in respect in adulation and "Solid Brass" handles it's subject with a sense of fun and delightful subtlety like that of an inside joke. The choruses metamorphose; changing words but not melody eventually becoming an amalgam of all its form and connecting the ideas into one phrase accompanied by the cathartic entrance of a choir of voices and a modulation. "You won't be sorry that you met me/I talk too much but rest assured you'll hear it lower in the morning". There's a lot happening to make such a moment satisfying but the self-referential, repetitive nature of the chorus unfurling into a sensible distillation of the song's ideas is an impressive feat of lyrical sleight of hand.

Landlady's third full length album The World Is A Loud Place is out January 20th on Hometapes.
Posted by Dante at 3:32 PM No comments: 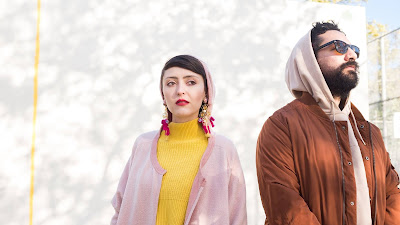 One of the most thrilling things about Brooklyn based Columbian electro pop duo Salt Cathedral is how they continue to push their sound forward without losing their sense of self. It's an all to easy thing to do especially in the pop realm where being able to pull from/pivot into different sounds and influences is pretty much expected but since the earliest days of the band and it's previous incarnation il abanico, Juliana Ronderos and Nicolas Losada have been able to retain something uniquely theirs even after they shifted from experimental prog rock quintet to just a duo.

"Unraveling" largely continues that tradition. Where previously released "Lift Me Up" and "Homage" were sample based b-sides, the production on "Unraveling" both resembles that of songs from their OOM VELT EP while also taking things in a different direction. Part of that may be in fact due to the nature of the collaboration with Matisyahu. Known for his spiritual take on reggae, the most surprising thing is how similar Salt Cathedral's penchant for tropical-inspired rhythms fits with Matisyahu's own style ensuring a collaboration that comes off as pretty effortless. Ronderos' vocals have always been the ace up Salt Cathedral's sleeve and though they're not as featured prominent as Matisyahu's riffs and raps, the moments the surge to forefront are enjoyable. Ronderos and Matisyahu's lyrics form an interesting parallel despite the difference in who they're addressing. Ronderos' are direct; a sort of aggressive nonconfontation "If you're looking to fight me, intermittently all I have for you is bread and flowers"/"If you're looking to bring me down, you won't find me, you won't find me at all" Ronderos offers lyrics that are such an active presentation of meeting animosity with love and positivity. Matisyahu's are intially more abstract but much more visceral. Delivered upward/internally, his lyrics are more appeals for strength to confront those challenges.

"Unraveling" shows off more of Salt Cathedral's versatility as it utilizes a different musical style and imbues with the bands own strengths as well as introducing other players into their orbit. Salt Cathedral's production in "Unraveling" is sure and confident enough to actively represent them as they allow Matisyahu to take the reigns and the main focus. It was a surprising step but one that ultimately succeeds due to the duo's strong sense of self. Whether the duo's upcoming forthcoming full length debut will feature more collaborations I don't know but based off how seamless their work with Matisyahu was, I have faith that others will stay true to the band's distinct character.