While English singer/songwriter/multi-instrumentalist and producer Cosmo Sheldrake's previous releases "The Moss" 7", and his debut EP Pelicans We have established Sheldrake as an exceptionally talented songwriter, producer, and musician, "Come Along", the first single from Sheldrake's upcoming debut full length record The Much Much How How and I, displayed an ability to balance subtle minimalism but also incredible pop maximalism that was enough to get me properly excited for Sheldrake's full length debut and second single "Mind Of Rocks" continues to demonstrate Sheldrake as an incredibly versatile creator as well as upend all expectations of what to expect on the upcoming full length.

Despite the lack of Sheldrake's own vocals in favor of the heavily featured Brighton based artist Bunty, "Mind of Rocks" continues to weave Sheldrake's intricate production with his ever curious use of field recordings. Panamanian bats, a Scottish gale, and one of Sheldrake's beat-boxing lessons is but a few of the sounds he builds the track on. While Sheldrake hasn't shied away from being non-featured on vocals before - see "Rich" from Pelicans We which featured Andreyah Vargas, a friend of Sheldrake's, the different in the two tunes lays in the fact that the vocals in "Rich" still largely depended on Sheldrake's skillful deployment of Vargas' pre-recorded vocal samples. The result was a sort of chopped up effect that fit perfectly with the cacophonous bolder smashing Sheldrake utilized as the backbone beat of the track. "Mind Of Rocks" sees Sheldrake giving up some of the control for Bunty's more svelte, freer vocal performance. It's a track that relegates Sheldrake almost entirely to a producer role which he's proven exceptionally gifted at so far. Even as he brings in veteran composer/producer and fellow field recording enthusiast Matthew Herbert as co-producer.

And yet, there's no denying "Mind Of Rocks" is far less lush and complicatedly layered than some of Sheldrake's previous efforts - especially the multitudinous first single "Come Along" from his upcoming full length debut. But sparse - or sparser than he's been recently is refreshing and definitely provides an effective showcase of Bunty's vocals.

Cosmo Sheldrake's debut full length The Much Much How How and I is out April 6th on Trangressive with pre-order available now.
Posted by Dante at 11:31 AM No comments: 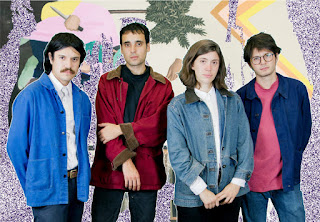 While Philly based rock pop experimentalists Palm released their Shadow Expert EP earlier this year, they've already had the follow up to both it and debut full length record Trading Basics firmly prepped. So much so that fans of theirs who caught them on their most recent tour promoting the EP heard many of these new songs. "Pearly", the album opening track and first single from their upcoming record Rock Island, essentially bridges the gap between Shadow Expert and this new record, in that while it features the quartet's trademark complexity - both in rhythmic figures and time signatures, it keeps in line with much of Shadow Expert in dulling much of the harsh, abrasiveness of Trading Basics.

"Pearly" also finds the band introducing new elements to their already multitudinous layers - namely in the addition of synths. Guitarists Kasra Kurt and Eve Alpert have largely experimented with the expectation of guitar sounds in the pursuit of their mathematical art-pop so much so that you're not entirely sure the synth sound isn't just a guitar run through some cool effect. But outside of Palm, Kurt has been experimenting with electronics (as evidenced by his split Nino Tomorrow with Ada Babar released late last month) and that experimentation has found its way into Palm. Even with the addition, the synths are treated as more of another color to paint with instead of point of primary focus especially as Kurt essentially sets and forgets the synth sample and accompanies Alpert in their trademark angular guitar interplay.

"Pearly" is wonderfully dreamy - featuring Alpert as the lead singer as she spins lyrics at once fragmented and mysterious: "I can feel elimination coming/what to do, I look around at nothing" Alpert begins and the existential crisis contained therein is at odds both with the collected calm of Alpert's delivery as well as Palm's buoyant accompaniment.

But Palm have always been a band of contradictions and duality, and "Pearly" is no different. It's a song of complements as vocals operate both in the more textural sense Palm have always regarded them as well as giving an indication of what "Pearly" is about. But Palm don't make it easy and the lyrics are playfully tossed and turned in the wave-like lilt of Palm's unexpectedly smooth instrumentation. Where Palm might normally infuse jolts of energy through the use of jagged guitars or a rush of harsh noise, the differing element lies in Alpert's vocals which rise to climatic sighs.