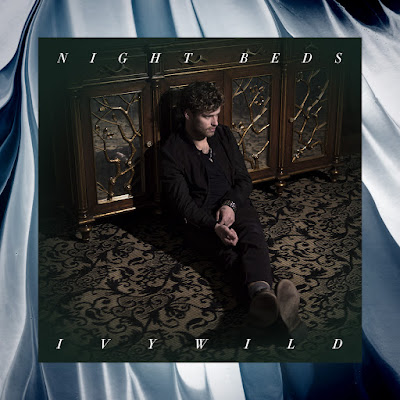 After a very strong debut in 2013's Country Sleep, Nashville based singer/songwriter Winston Yellen teased a new direction, an expanding of genre for his musical project Night Beds. It makes a strange sort of sense when you take into account that between the Every Fire; Every Joy EP and debut album and even between individual tracks on Country Sleep the only real consistency was Winston Yellen's voice. Country, folk, indie rock, dream pop, Yellen drew from genres in a way that was subtle but ultimately telling of his predilections - Yellen creates music on his own terms.

How Ivywild is received can say far more about the listener than Winston Yellen's musical project. When it was teased at the very end of last year with "Me, Liquor & God" a fair amount of hand-wringing could be done to define the track exactly as you wanted. Myself? I found it more in line with an interest in electro pop and the dreamier layered atmospheres of Night Beds' earliest released tracks. By Yellen's own admittance Ivywild is meant to be a full foray into R&B. Dilla, Kanye, Madlib, Jai Paul - these are the influences Yellen namechecked when explaining the album's creation and the rise of his brother Abe into a more active part of the composition process from drummer to producer and engineer. For many the jump may be seen as an out of nowhere leap; for Yellen it was a gradual process that required putting in the necessary work. Abe had to learn the gear, Abe had to learn how to translate musical thoughts into intricate tapestries that Winston could affix his journals of songwriting notes. It was a three year process of believing they were making music worth making - a much more failure prone endeavor than effectively stringing chords together as they embarked on a totally new musical adventure that effectively discarded all their previously learned skills. In addition to expanding their genre options, they expanded the band enlisting a wide majority of musicians to play.

As an album Ivywild is a strange beast - the album opener "Finished" is essentially your first introduction to the Yellen brothers pivoting, to a Night Beds defined by more than Winston Yellen; the introduction to the various players and moving parts on the album and it is an occasionally awkward one. Virtuousic romantic string passages, glittering synths, with Winston's growing build into a free-flowing ametric stream of consciousness delivery that ends with a sample and a rush of noise. Though Winston Yellen's voice is surprisingly well suited to its more electronic heavy new digs, there's something slightly off about how everything blends here in particular. By Winston's own admission Ivywild is as much of a showcase for his own musical ideas as they are for Abe Yellen who's been tasked with programming much of what occurs musically on the album. There's the occasional stumble in the form of not-quite-right timing issues and curiously utilized and deployed samples ("Eve A") but those moments are few and far between Abe's major winsome moments of creative climax ("On High:", "I Give It").

It's an album that recalls a lot of what has been popular in indie music for the past couple years without simply imitating it. That lack of imitation may lie more in the pair's inability to from a technical standpoint, it may not. There's really no telling here but there's no denying that even if Ivywild isn't they kind of album you expect, isn't the kind of album you would generally even like that it's an album that's at least interesting to digest. For an album where Winston Yellen works through heartbreak, heartache, and redefining of the self, there's those expected moments of somber introspection ("Me, Liquor and God", "Tide Teeth", "Melrose"), but also absolute dance-it-out abandon ("Sway(Ve)","[9_6] Slackjaw"), and curiously there's that rare moment where the Yellens forget all about their laptop pop aspirations, drop the beats, the synths, the autotone, and just let a moment fly with guitar and heart ("All In Good Time (I Get You Wrong Interlude)"). It's an album that takes those negative feelings and turns them outwards instead of inwards; converts the emotional to a physical reaction. Yellen's been hurt but he's not holding it in anymore but he's also not moping about it. Instead Winston and  Abe (and the collective of musicians they brought together) finds a way to imbue that melancholy with a bit of forward momentum; to stir not only your heart and soul also the body. It's an album of 16 songs perhaps meant to evoke the feeling of a mixtape where the number of tracks are almost irrelevant and what's truly important is showing off the project's talent and potential.

And just when you settle into a comfortable position with the electronic direction, a song like "Stand On My Throat" emerges to close out the album. All sense of premeditated cool evaporates and Winston returns to his greatest asset: the total arresting thrall of his vulnerable, heartstring-tugging vocals. The experimentation is over and a moment of true, earnest simplicity is how they choose to close this all out - a reward to fans of their old sound that hung around, a highlighting of what Winston really brings to the table to the newly initiated. "Stand On My Throat" is an effective synthesis of Night Beds' privileged position of having extra musicians on hand - brass contributing to the wellspring of feeling, the gradual ebb and flow that eventually gives way to an emotional deluge. Winston Yellen goes from a pleading whisper to an unrestrained insistent shout and the effects are more visceral than the album's previous attempts to be ear-catching. It's a blend of the organic and the electronic - easing in autotune in small bursts along twinkling piano, sweetly picked guitar. "Stand On My Throat" resembles what I had hoped an electronic leaning Night Beds might sound like and we're fortunate enough to receive.

Ivywild both marks an time of growth and uncertainty for the band. In releasing it, Winston Yellen gets a proper answer to three years of questions and assumptions: "Will people love it or hate it?" but also frees himself from the need to care. If he cared, it's probably not an album he would have made in the first place. To me it resembles far more of the electro pop acts like BANKS, Chet Faker or even James Blake than R&B but genre is a dying construct that no longer holds much bearing on what music will give us. What ultimately matters is that in Ivywild, Winston and Abe and all of their compatriots in this endeavor pursued an interest, an artistic impulse to its completion. There's no telling what the future of Night Beds holds (I hope it sounds a whole hell of a lot like "Stand On My Throat" or "Corner") but Ivywild shades a bit more of who Winston Yellen is as an artist and what Night Beds can or might continue to be. Experimentation is what keeps an band interesting enough to return to again and again and with Ivywild, Night Beds takes that almost to an extreme pursuing an interest almost completely at odds with who they had previously been decided to be. It's no doubt freeing and whether or not this is a small musical diversion or a full on declaration of intent, the deed is done and on their own terms.

Night Beds' sophomore album Ivywild out 8/7 via Dead Oceans. You can stream the album until its release date on NPR.
Posted by Dante at 1:25 PM