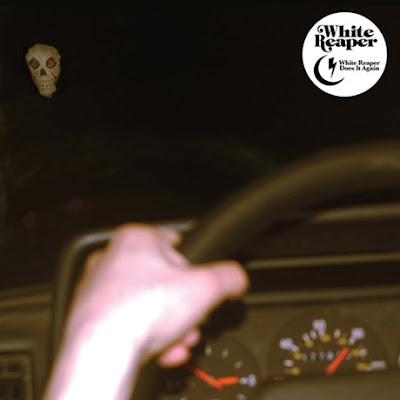 When Louisville foursome White Reaper burst onto the scene last year with their self-titled debut EP they were an refreshing melange of old school punk with updated synth pop. The fact that their EP just barely clocked in at 15 minutes was an impressive enough feat considering most modern bands would much rather say too much with psychedelic deviations than say too little and keep with the true punk riot spirit. But White Reaper's debut proved that they were more than just a cover band - able to imbue their brief but brilliant with just the barest hint of an infectious hook to get you to press play again and again. Their songs were short and sweet but instantly memorable and on their debut full length White Reaper Does It Again, White Reaper attempt to do just that: to capture the lightning in a bottle once again

The biggest surprise of White Reaper Does It Again is perhaps that it's so damn listenable. For a band that fuses together garage rock, punk, and synths, there's a startling sense of easy listening that works pretty incredibly for the band. Make no mistake White Reaper stills rips, they just do so melodically and without getting in each other's way. The songs are given some breathing room but their rapid-fire intensity doesn't dissipate for a moment. The vocals are crystal clear and simple to the point of springing immediately to mind but not banal enough to bore you to death and their sound expands to encompass vintage indie rock illustrated most aptly in their Strokes-esque "On My Mind". Another surprise of White Reaper's debut full length is that as it colors in the sketches of their self-titled debut EP, there's little attempt for the band to posture as tough guy punks with songs like "Make Me Wanna Die", "I Don't Think She Cares", or "Sheila" proving they're not above emoting in a way that's decidedly non-whiny; an antithesis to many of the bands masquerading as punk rock groups these days.

The inherent political spirit of punk rock is missing in White Reaper's music as the band extrapolate on the seemingly mundane. White Reaper aren't total outsider music but engage in broader,more universal appeal. Their music is influenced by the Ramones and the Clash but not beholden to it and White Reaper manage to turn a rebellious sneer not towards society or the establishment but towards their own relationships. It's not overt though. But White Reaper capture the twentysomething experience throughout White Reaper Does It Again as they tackle everything from breakups, crushes, doubts and heartache with an invigorating lack of drama.

While White Reaper was the real introduction to the foursome's brand of fuzzy punk pop, White Reaper does an excellent job of following up on that potential in a way that's not merely replicating what worked well for them on the EP. White Reaper Does It Again moves briskly but not for lack of something to say. White Reaper are a band that never overstays it's welcome and their debut full length is a pitch perfect encapsulation of that; getting to the point efficiently but without sacrificing entertaining musical dressings.

White Reaper's debut full length album White Reaper Does It Again is out now on Polyvinyl.