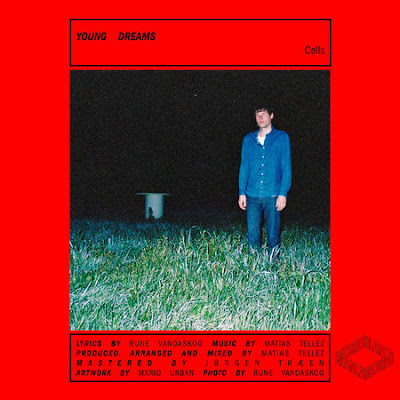 Though it was essentially an salvaged outtake from their abandoned sophomore full length record, "Of The City" hinted at a brand new direction from the orchestral pop sextet Young Dreams. Though it made use of organs and strings, there was a reliance on synths and they were utilized far differently than they were on the band's debut Between Places. And when they released r&b tinged single "Sinner (I'm Sorry)" earlier this year, the potential direction of their new album was once again up in the air.

"Cells" however finds the band at a sound that is perhaps far more sustainable for a full record. Another indicator that the band has largely left behind the symphonic layering that defined much of their debut, instead "Cells" finds Young Dreams drawing closer to those psych rock grooves that inspired them do a Tame Impala rework. But unlike "Sinner", the musical direction doesn't seem as far of a leap away from their original sound than it ends up being. "Cells" certainly doesn't lack for experimentation but elaborates more on the band's previous ventures in tropicalia and psychedelica. "Cells" is a laid back soak in the sun very in line with Young Dreams' normal sun-kissed musical escapism but is much more than a traipse down Young Dreams sounds past. Much like how the titual "Young Dreams"/"Flight 376" and "Expectations"/"Dream alone, wake together" singles informed the direction of Between Places, those same building blocks serve as a sort of alternate timeline here. One that relies more on the band's immediately presentable skills than in Matias Tellez's incredible production talents. Not that Tellez's production is missing on "Cells" but unlike "Sinner" and even "Of The City", they're reigned in and honed in a bit more. Though Tellez utilizes a number of percussive effects and samples as well as synths, they're treated with a lighter touch than the previous singles. Also Rune Vandaskog's vocals remain largely untouched by effects unlike the persistent autotune that they were run through before.

"Cells" is a picture of a subtler Young Dreams. Where Between Places captured these incredible emotional reflections and paired them with grand arrangements and intricate layers, "Cells" finds a bit of a balance between what the band can accomplish live and what works in the studio. It's the first song (and potentially the only one that'll actually be on the upcoming sophomore record) that you can actually imagine the band playing live even as it dips into it's electronic moments.

"Cells" is an incredibly catchy work of pristinely plotted psych-infused pop and one that highlights just what makes Young Dreams work so well as a unit. They don't need orchestral flourishes to define them; what they have instead is an tight-knit precision and a pursuit of sounds and colors that make their hometown of Bergen sound a little brighter.

Watch the lyric video for "Cells":


Young Dreams' sophomore full length record Waves 2 You is out January 12 via their own Blanca Records. You can pre-order the album now through their new Bandcamp page.