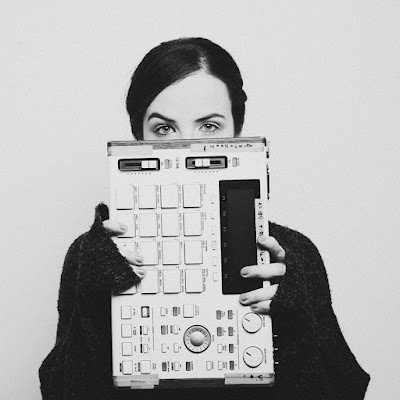 I was introduced to Colombian producer Ela Minus at the release show for Psychic Twin's full length debut Strange Diary as she was the opener. I was immediately charmed and it's not hard to see why. Ela Minus' Gabriela Jimeno creates pop songs that combine the urge to dance with an expansiveness seemingly at odds with that very urge and yet that balance is what makes Jimeno's songs so intriguing. There's a simplicity in its construction and style that allows Jimeno to cleanly and efficiently stack layers without obscuring a single effect from view. And that's the most impressive thing about Ela Minus: a sense of ease that pervades her whole project. Her melodies are a minimal but intensely memorable as nursery rhymes and Jimeno's voice is downright enchanting as she soars over her light stitched together electronic pieces with bilingual lyrics. In a sense her vocals are another timbre she deploys in her textural palette. The listener doesn't have to understand what she's singing to be caught up in the feeling of weightlessness her vocals provide.

"Juan Sant", Ela Minus' latest single for her upcoming EP Apart essentially continues where she left off on last year's Grow EP. One of her shortest songs in length, Jimeno wastes little time getting into it. There's still a build up of layers but she's quick about it without it being jarring. Her melodies travel from voice to synth and back again constantly getting handed off and handed back. All the while Jimeno's counter melodies and harmonic ornaments ensuring that what she's up to isn't obvious enough to strip away the fun of the discovery. "Juan Sant" is brief but illustrates Jimeno's songcraft: simplistic but nonetheless capable of musical sleights of hand that make Jimeno's songs operate on a whole other level.

Ela Minus' Apart EP is out February 17th on Yebo Music.
Posted by Dante at 1:47 PM