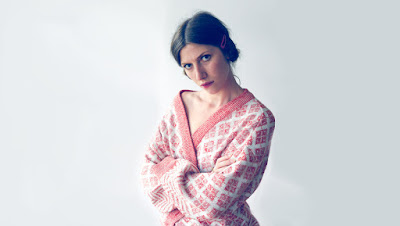 I was introduced to New Zealand singer/songwriter Aldous Harding through her touring with several musicians I already knew and loved like Andy Shauf and Tiny Ruins. I was immediately taken by Harding's bewitching vocals and her incredible anachronistic brand of folk. Her songs were simultaneously sparse but featured intricately paced narratives and just the right infusion of strings and harmonies. Though I was incredibly late to her debut (I listened to the Flying Nun re-release of her self-titled record in December), I've eagerly awaited the news of her upcoming album.

"Imagining A Man" is the second single from her forthcoming sophomore record and 4AD debut Party and it finds Harding moving in a decidedly more conventional direction. Where first single "Horizon" was both reminiscent of her debut while pushing her sound forward and her lyricism, "Imagining My Man" manages both to push Harding's sound forward and her lyricism inward. Where her tales on her self-titled seemingly belonged to bygone eras, "Imagining My Man" seems not only could it happen in the here and now but that it can effect you. Where Harding sang of love and fear in the form of hunters, beasts of prey, and hauntings, Harding presents a her love song both far more intimately and vaguely but in that vagueness Harding draws a compelling amount of drama. Harding has established herself as a gifted storyteller armed not only with an impressive, evocative vocabulary but enchanting sense of pacing and "Imagining My Man" is no different. The difference lies in Harding trying on a sort of different skin; that of a pop singer and it fits surprisingly well. Though those wondering if a lean toward pop might erase what made her so unique need only look to "Horizon" her previous single off Party to get the sense that Harding beguiling sense of mystifying eeriness is alive and well and making it's way out of Harding in increasingly unexpected ways. "Horizon" and "Imagining My Man" couldn't be more different and that makes my anticipation for Party all the most palpable.

Aldous Harding's second full length album Party is out May 19th on 4AD/Flying Nun. You can pre-order it here.
Posted by Dante at 1:29 PM