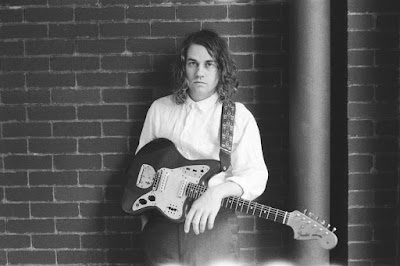 When Los Angeles based singer/songwriter Kevin Morby announced his latest album City Music early this morning I was incredibly surprised. The man had released his third full length album Singing Saw, a wonderful collection that celebrated the solitude of his simple living out in California, a little less than a year ago. To think that Morby could immediate come off that collection to offer another was mind-boggling yet non completely out of the ordinary for Morby. His first album Harlem River was followed just as swiftly by sophomore effort Still Life. And yet one assumes with all the touring Morby's been doing that a record would be the furthest thing from his mind. Enter City Music. The album is offered as a counterpoint to Singing Saw.

"Come To Me Now, the first single from City Music, begins with an organ swell; an addendum to Singing Saw's plentiful auxiliary instruments. With the exception of the organ, "Come To Me Now" follows a familiar thread of composition for Morby, it builds with an impressive amount of patience as his band member flutter in and out of focus like birds (with craning angular melodic lines that recall bird calls).  Though "Come To Me Now" is essentially a call for companionship, there's no missing both in its wide expansiveness and also several key phrases a sort of inherent loneliness. "Ain't got no friend in a world so big/Ain't got no family, ain't got no kin" Morby sings in one of the initial verses and it makes his efforts to connect that much more compelling. Morby's change of setting is subtle gleaned in cast-off phrases and the percussive clang of what sounds like pipes being hit.

Where Singing Saw proceeded like a stroll through nature, "Come To Me Now" finds Morby at a distance far removed. He's singing from a rooftop or a window above a city he doesn't much care to know; singing of the pleasures of nature in a place where it's only a memory. The narrator essentially refuses to engage and reaps his own forced solitude. It's an interesting way to start an album inspired by the city from a man who has called many cities home and it sets up a bit of intrigue as you can't help but wonder how the narrator will change and grow if at all along the album or if "Come To Me Now" is merely a one-off with different points of view to be explored. Who's the say but I certainly am hooked.