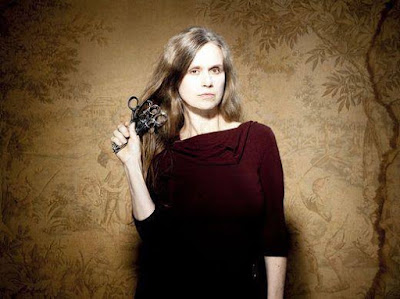 I was first introduced to the intricate experimental pop of Argentinian singer/songwriter Juana Molina through her brilliant sixth album Wed 21 when it came out back in 2013. Though her lyrics are in Spanish, Molina crafts the sort of engaging pop songs where you're too busy bopping along to its rhythms to notice. Molina's music is beguiling complex - layers upon layers of electronic and amplified acoustic instruments, driving primal rhythm figures, and vocals utilized more for its possibilities in timbre than its melodic capabilities, Molina's music evades classification as easily as it's sure to get stuck in your head. "Cosoco", the first single from Molina's upcoming seventh album Halo, continues Molina's love affair with aural hypnotism. It's brighter than her more darkly textured efforts and yet her chorus which consists of aspirated chants of its titular "cosoco" introduce a fleeting sense of malaise. It's shifting sounds are positively spellbinding as parts shift in an out of focus, a distant whirring grows until it practically envelopes everything but cymbals and drum hits. Molina's musical world building is at it's best with each sound and musical phrase feeding into each other to creating an absolutely dazzling aural tapestry. It's an absolutely fascinating listen and one that hints that Halo with it's themes of witchcraft and premonition is going to be a thrilling ride.

Juana Molina's forthcoming studio album Halo is out May 5th on Crammed Discs.